Eddie Howe spent the early part of this week taking on the red half of Merseyside. His players then saw to the blue half on a fiery night at St James’ Park.

The Newcastle boss is not prone to pre-match headline-making. He probably would not have liked, on reflection, that his forceful response to Jurgen Klopp’s claims about his club’s limitless spending had set the agenda going into this game.

So after a third win in four matches lifted the Magpies into fifth on full-time, Howe would have been far happier that it was his team up in lights. 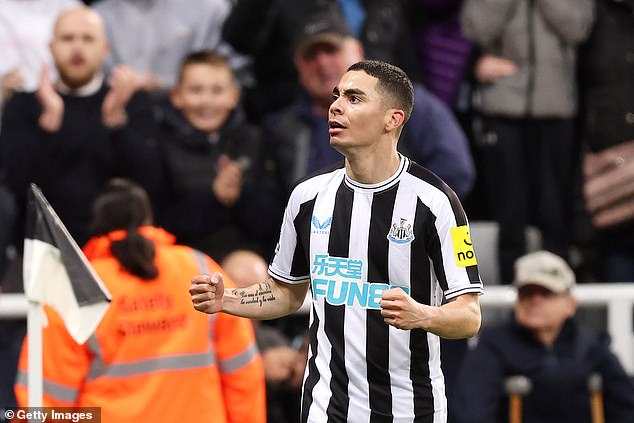 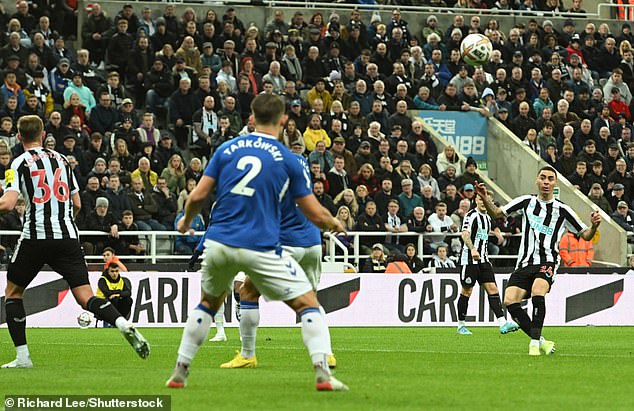 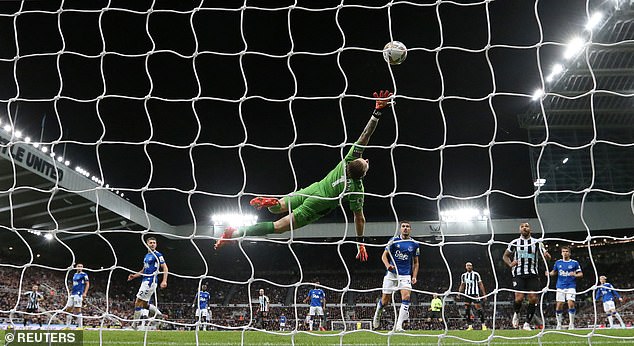 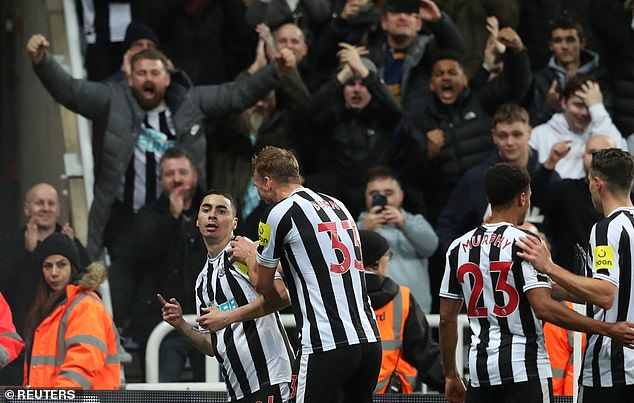 But for Everton and Frank Lampard, another dark away day, a 16th loss in 23 on the road. They were poor – not a single shot on target – and that is now three defeats on the spin. They were beaten by Miguel Almiron’s super first-half strike, and it never looked like the hosts would need anything more.

A word on the match-winner. For all of Newcastle’s investment – £200million on eight signings – and Klopp’s moaning about their ability to buy success, it is a player the new owners inherited who has been at the heart of their drive up the table. That is now four goals in as many games for the oft-maligned Paraguayan.

The first 30 minutes had been high on quarrel, low on quality. Almiron changed that when curling the opener. As Bruno Guimaraes rolled to his team-mate on the fringe of the area, Jordan Pickford dashed from his line, and so invited Almiron to shoot. His RSVP was dispatched first class. Top corner. Postage stamp.

Pickford can be prone to head rushes in these parts, given his Sunderland loyalties and the inevitable baiting. But he plays for Everton now, has done for five years. Two seasons ago he was dropped for this fixture by Carlo Ancelotti. There is an adage about playing the game and not the occasion that invariably springs to mind.

He was beaten twice more before half-time but, both times, Bruno stabbed inches wide from inside the area. Everton would have been relieved to get to the interval trailing by the solitary goal. 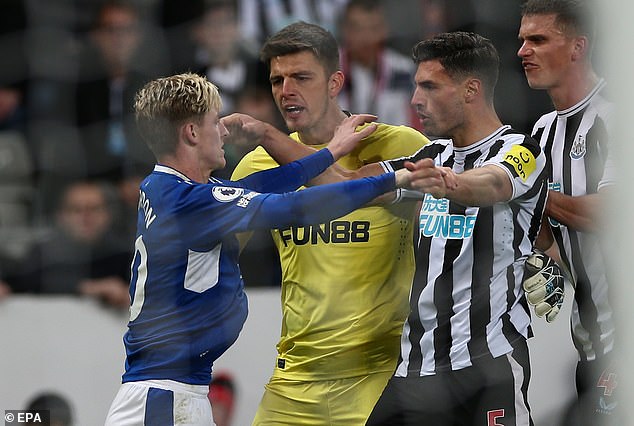 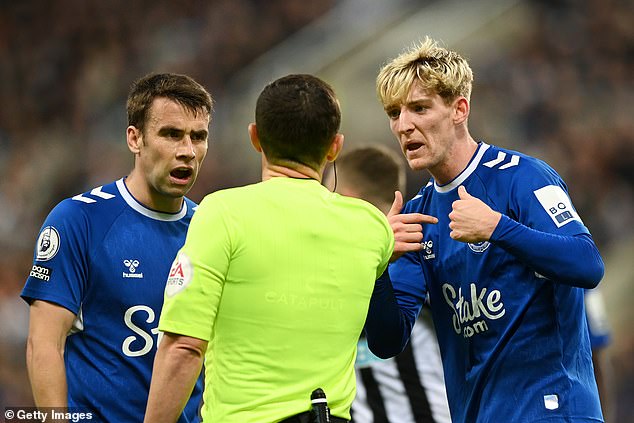 However, Gordon (right) received his sixth yellow card of the campaign just before half-time

At the other end, they offered nothing during the first half. If Nick Pope wanted to impress while up against England rival Pickford, he certainly was not getting the chance.

Newcastle had come into the game with the league’s best defence, nine conceded from 10 matches. Howe says he does not read the press, but he had seen the accusation of him being a manager who cannot organise a defence when arriving here last year and, in his own words, he ‘did not like it’.

Leopards, then, can change their spots, and Howe’s big cats at the back prowl their territory in black and white stripes these days.

One of those who protects the backline, Joelinton, did not emerge for the second half. Howe is not daft and, while the Brazilian did appear to pick up a slight knock, he probably should have seen red just before the break for a clumsy foul worthy of a second yellow. 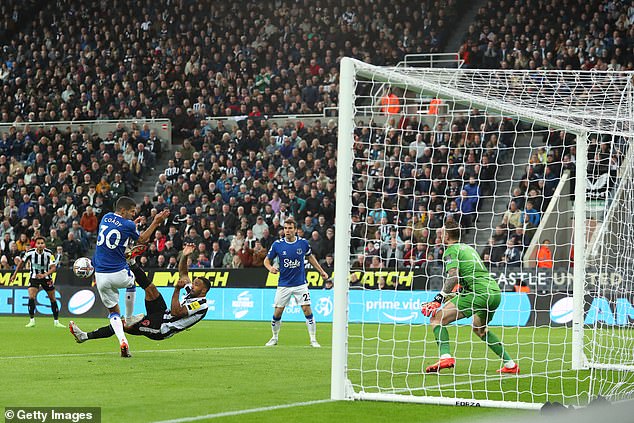 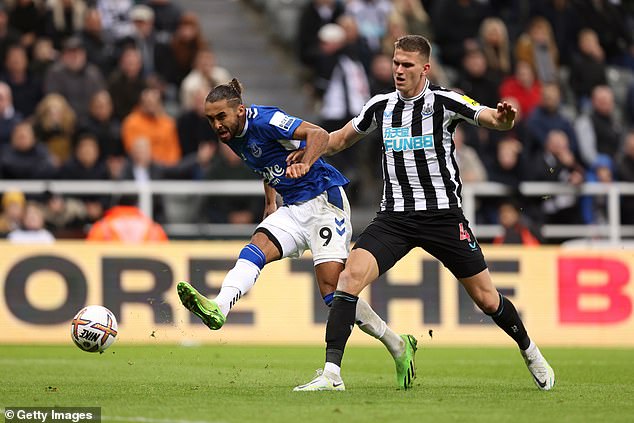 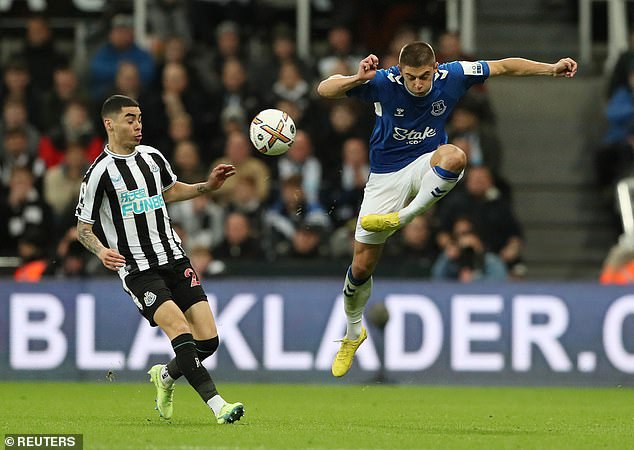 Interestingly, Newcastle made enquiries for Everton forwards Dominic Calvert-Lewin and Anthony Gordon during the summer. On both occasions they were put off by the asking price.

On this evidence, they are unlikely to return in January. Calvert-Lewin lasted 73 minutes – each of them ineffective – before being replaced. Speaking of England, the striker did little to strengthen his ever-weakening claims for inclusion in the World Cup squad.

Newcastle’s Callum Wilson was better but is still finding his way back to form and fitness after injury. Time is running out.

And time ran out on Everton here. Saying that, they could have played another 90 minutes and would have done well to have a shot, let alone score a goal.