MARTIN SAMUEL: Are Jurgen Klopp’s lot a team of nearly men? Manchester City, Chelsea, Tottenham and now Real Madrid have worked Liverpool out… this great side is in danger of going down in history as underachievers after Champions League final defeat

Those that got in, remained to the end. How could they not, given the history of this club, in this competition?

Yet after the hour, when Vinicius Junior appeared on the blindside and scored, it was strange. There was an unfamiliar emotion, an unusual acceptance of fate. The belief that follows Liverpool around Europe was missing.

Maybe the external turmoil had dampened spirits, or maybe the realisation hit that this season, having promised so much, was actually going to deliver too little. 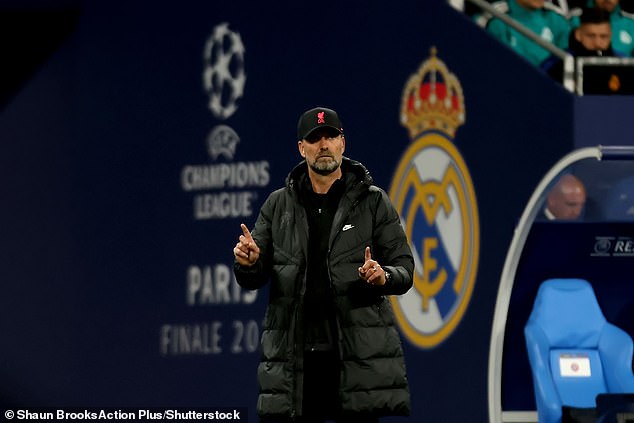 Of course, there are plenty of years when two domestic trophies would be warmly welcomed, when yesterday’s bus parade would not have felt as much wake as celebration. Yet given what Liverpool would have won, should have won, could have won, we were left wrestling with a difficult question. Might this be one of those great nearly teams?

It seems ludicrous to even suggest it. Jurgen Klopp’s Liverpool have been champions of Europe, champions of the world, and the first Liverpool team to win the title in the modern, Premier League, era. This is one of the great Liverpool teams, some argue the greatest. In any other time they would quite probably have dominated the English game.

Does this mean they are not great? No. Some of the finest teams in football’s history have been nearly men. The Hungarian side that changed the modern game never won the World Cup. Holland’s total football did not deliver a trophy. The 1982 World Cup Brazilians did not advance beyond the last 12, the second group stage. 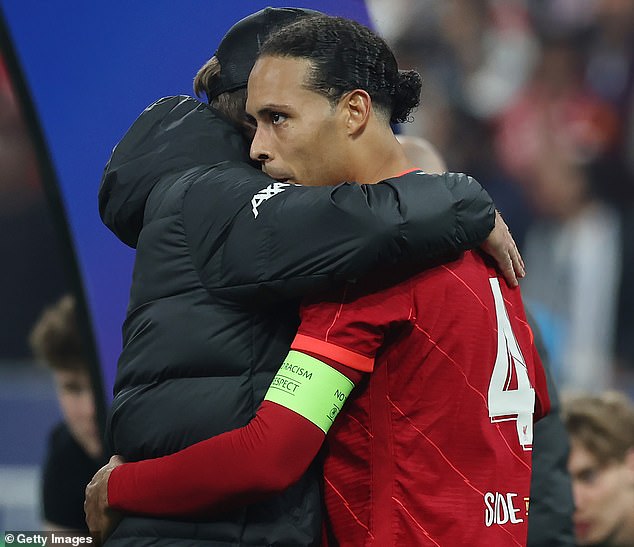 And winners can be nearly men, too. Don Revie’s, and later Jimmy Armfield’s, Leeds won the league twice but finished runners-up five times. They won the FA Cup once but lost three finals. They won the UEFA Fairs Cup twice but lost the final of the European Cup and Cup-Winners’ Cup. They are remembered as much for what they might have won, as what they did.

Was it a great football team? Most certainly. So the points tallies that Liverpool have accrued to finish second, their three Champions League finals in five years, these matter. Yet there was a degree of fatalism in the red end on Saturday night that few have seen before, a feeling that, once Madrid were ahead, this was not to be their night.

‘Can they score, they always score?’ Clive Tyldesley said of Manchester United in 1999, yet there was not that optimism around Paris. Too many chances missed, too many passes astray, too many dead balls struck within range of the brilliant Thibaut Courtois in Real Madrid’s goal.

And perhaps a tacit acknowledgement that Madrid were the most resilient team in the competition this season. That, once ahead, men like Casemiro — also outstanding — know how to close out a match of this magnitude. 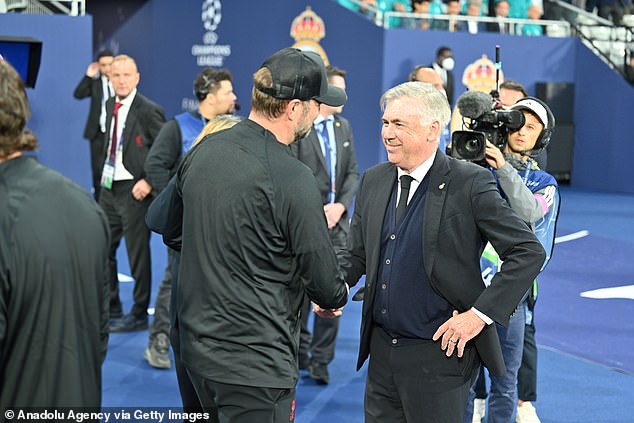 So when Klopp told the fans to book their hotels for next year’s final in Istanbul, for the first time he sounded as if he was trying just a little too hard, forcing it in a way he previously did not.

Liverpool fans sing of the veracity of his predictions — ‘Jurgen said to me, you know, we’ll win the Premier League, you know, he said so’ — but this had the air of a man trying to rally a club that had taken a significant knock. In one week, they had lost the two biggest prizes of their quadruple campaign.

In keeping with the I Feel Fine parody, Liverpool were off in search of football’s Fab Four. Imagine, then, in the 1970s organising a successful Beatles reunion, only to be told at the last minute that two of them could not make it? 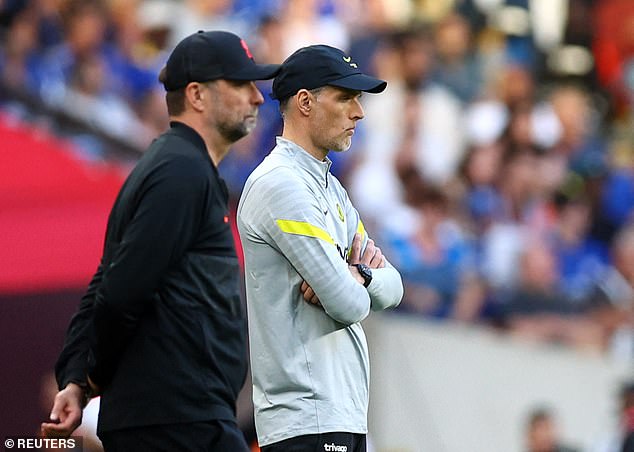 And yet, if Klopp’s Liverpool are to go again, can they keep going like this? It is brilliant, the way Liverpool play, it is high energy and compelling and given his net spend and where Liverpool were when he arrived, he is probably getting more out of his players, pound for pound, than any coach in world football right now.

Yet certain facts are troubling, because while Liverpool came so close to winning everything, they came two penalty shootouts away from winning nothing, too. 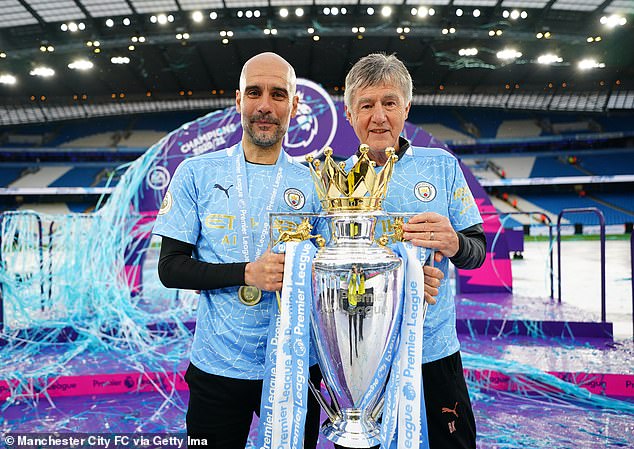 In three cup finals this season, Liverpool have played five-and-a-half hours of football and haven’t scored a goal.

Plus, in nine matches against the top four clubs in all competitions — Manchester City, Chelsea and Tottenham — they have won a single game, against an under-par, exhausted City in an FA Cup semi-final.

They haven’t lost, either, but a record of P9 W1 D8, suggests the elite managers — Pep Guardiola, Thomas Tuchel, Antonio Conte — have worked out what Liverpool do and how to set up not to lose against them, more often than not.

Carlo Ancelotti, the first manager to win four Champions League titles, is often dismissed like some Chauncey Gardiner figure, from the film Being There. 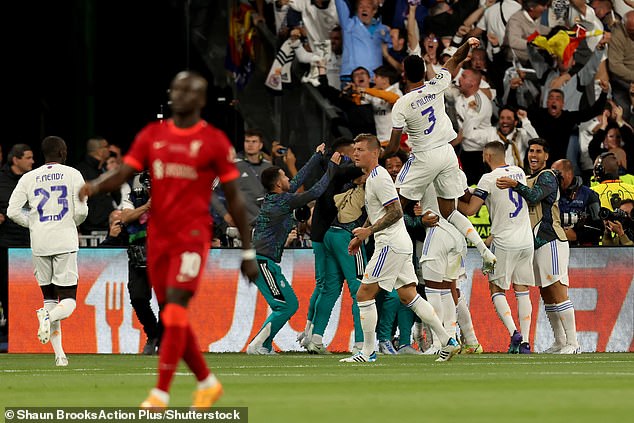 A simple man, whose simple ideals are misinterpreted by the desperate political class around him as great wisdom.

Much was made of him consulting with his senior players over substitutions in the semi-final win against Manchester City. He also does not have an instantly recognisable football philosophy like Klopp, or Guardiola.

Yet as Ancelotti points out, that makes him a difficult opponent because nobody knows for sure what he will do. In the aftermath of his record final win, Ancelotti as good as explained this gave him the edge over Liverpool.

‘Liverpool were strong, but if you keep a high defence and give them room to attack behind you, that’s where you struggle,’ he said.

‘So our defenders did well to close those spaces. I think it helped that Liverpool were easier to decipher than others, because they have a very clear identity and we could prepare the way we did.

‘We knew what strategy to take, don’t give them space behind the defence to run into. Perhaps our football wasn’t extraordinarily beautiful on an aesthetic level, but playing out from the back to incentivise their pressing wasn’t a great idea.

‘We hit a few more long balls, then when their press in our half of the pitch lessened, we got to control the ball more in the second half.’

And there it is, in plain English: how to beat Liverpool by the man that did it. If Klopp is to stop his team being nearly the best from here, he will have to address this.