Cristiano Ronaldo was absent but Manchester United found a way to come back from conceding an early goal to beat the Melbourne Victory 4-1 at the MCG on Friday night.

A crowd of 74,157 watched the English Premier League giants joyfully as the likes of Bruno Fernandes, Marcus Rashford and Anthony Martial showed glimpses of their quality although there were enough gaps in the crowd to show it was well under the 95,446 who came to watch Liverpool take on the Victory in 2013.

Scott McTominay, Martial and Rashford scored the goals for United and former Red Devils star Nani made his Victory debut in the final minutes after signing on as a marquee player for this A-League season. 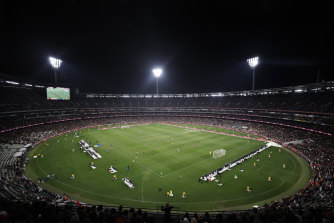 The Victory will have won some new supporters after defending staunchly and scoring a well-crafted goal just four minutes in from Socceroos attacker Chris Ikonomidis.

New United coach Erik ten Hag has just started his tenure but he will have some concerns with the ease of the Victory’s goal although AUD$87.5 million (50 million pounds) defender Lisandro Martínez will hopefully improve that area when he joins the team after the tour.

Ronaldo remains on family leave and isn’t on tour with the Red Devils while also having a transfer request sitting with United management while Spanish goal-keeper David de Gea wasn’t in the team at all after taking a knock in the pre-season clash with Liverpool in Bangkok earlier in the week with Tom Heaton donning the gloves.

The Victory were playing their first game of the proper game of the new campaign with goal-keeper Paul Izzo making his debut but just four minutes in Melbourne took the lead.

Little-known wingback Jay Barnett played in former Ipswich Town forward Ben Folami who powered down the right flank before sending a low cross to the middle where Ikonomdis was unmarked and scored in the left corner. 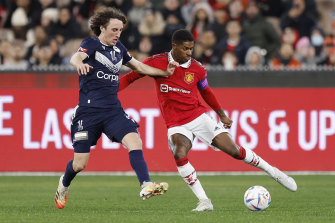 Victory’s active support quickly unleashed their second flare of the night while chants of “F—k off United”, usually reserved for rivals Adelaide United, were utilised to serenade the Red Devils.

United’s first shot on goal didn’t arrive until 15 minutes via a strike from McTominay while star midfielder Fernandes brought out the best from Izzo when his goal-bound strike soon after was parried away.

The Victory were looking fitter and more organised than you would expect from a first-game side but on 42 minutes they were powerless to stop a deflected strike from McTominay who barely celebrated when his shot caromed off the legs of an unsighted Victory player and looped over Izzo and into the goals.

That bit of luck was all United needed and they had the lead with the last play of the first half after right back Diogo Dalot ventured forward and crossed in a ball to winger Anthony Elanga who slid a lateral pass to striker Anthony Martial who slotted home a goal from close range for a 2-1 lead.

United manager ten Hag switched over all 10 of his outfield players at half-time with striker Rashford, midfielder Donny van de Beek and defender Eric Bailly among the better known players while youngsters such as Tahith Chong, Ethan Laird and Charlie Savage, son of long-time Wales and Leicester City midfielder Robbie Savage, were given the chance to press their claims for more game-time. 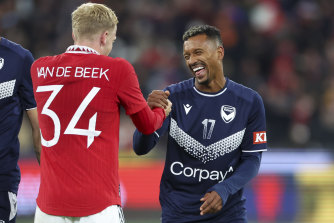 Chong showed some industry in midfield as did Zidane Iqbal but the game went flat as Victory defended deeply and the new United line-up found its feet.

On 78 minutes defender Eric Bailly pierced a slim gap in the Victory defence to find Rashford who slid the ball between the legs of Izzo who charged off his line so was left to watch the ball roll into the goals for a 3-1 lead.

Nishan Velpillay could have made for an interesting last 10 minutes if his 80th minute shot had found the target but it went wide instead.

Victory youngster Edmond Lupancu created a terribly unlucky own-goal late on when he turned in a cross from Chong although in the decades to come he could cheekily claim to have scored for Manchester United.

Nani arrival was greeted with a huge cheer from both sides on 86 minutes, both he and Victory showed there is plenty to be excited about once the season-proper begins.

Manchester United play Crystal Palace at the MCG on Tuesday.