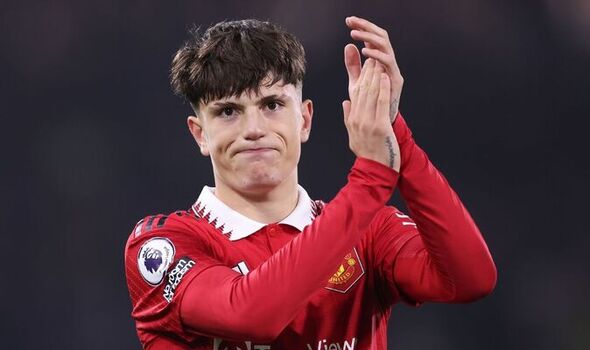 Manchester United’s star in the making Alejandro Garnacho has caused a stir back home in Argentina after liking a controversial tweet in the aftermath of his World Cup snub. The 18-year-old gem has been one of this season’s success stories in the Premier League after enjoying a dramatic rise to prominence in the past month under head coach Erik ten Hag.

Garnacho scored the winner for United in their 1-0 Europa League win at Real Sociedad before assisting twice in the 4-2 Carabao Cup win against Aston Villa.

The best was yet to come though as the teenage sensation came off the bench to net a last-gasp winner at Fulham in United’s final Premier League game before the World Cup.

Argentina boss Lionel Scaloni was forced into two late changes to his World Cup squad in Qatar on Thursday after Nico Gonzalez and Joaquin Correa were omitted from the side despite travelling to the Middle East.

Atletico Madrid’s Angel Correa received the first nod but Scaloni was considering Garnacho as one of three possible replacements for J.Correa alongside Giovanni Simeone and Thiago Almada.

In the end it was the 21-year-old Atlanta United attacking midfielder Almada that received the call much to the disappointment of Garnacho.

Garnacho, who has 350,000 followers on the platform, has since unliked the post but it has already gone viral – reaching both the Spanish and Argentinian media.

The Red Devils match-winner was born in Madrid and spent time with both Getafe and Atletico Madrid at youth level before joining Manchester United in 2020.

He has also represented Spain’s U18 side three times before switching international allegiances to Argentina in March 2022.

The jet-heeled winger qualifies to represent the South American country via his Argentinian mother.

Garnacho has scored four times in five outings for Argentina’s U20s while he was also named in their 33-man senior squad for their two World Cup qualifiers in March but did not feature.

Given Garnacho is yet to feature for Argentina at senior level, Spain could still effectively swoop in and snatch him from their clutches.

Ten Hag has gone the extra mile to ensure the player remains grounded after allegedly showing a questionable attitude in pre-season, according to his club team-mate Bruno Fernandes.

Prior to his brilliant winner at Craven Cottage, the Dutch tactician had ruled that the World Cup may have been too much too soon for Old Trafford’s latest revelation.

“It’s a big step to go to a World Cup, the best players in the world come together,” Ten Hag said.

“I don’t know if that’s the right step for him. He has to keep his head clean, stay calm, work hard and develop, go from game to game.”