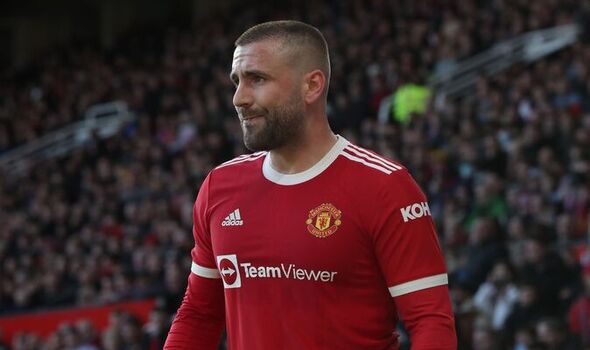 Manchester United have been dealt a cruel blow in the closing stages of the season after a setback in Luke Shaw’s recovery from his recent leg operation. Shaw could miss the remainder of the campaign as United fight to keep their fading Premier League top-four hopes alive.

Ahead of last weekend’s Everton defeat, United interim manager Ralf Rangnick confirmed the 26-year-old left-back was absent ahead of an operation to remove two metal screws in his leg. Shaw had screws inserted after suffering a double fracture to his right leg during a Champions League game at PSV Eindhoven in 2015.

Rangnick admitted the screws’ negative impact on Shaw’s game in recent months was ‘unexpected’ and ruled him out of action for at least three weeks. However, the England international looks set for a more prolonged spell on the sidelines than initially feared.

According to The Telegraph, Shaw faces a battle to play again this season because the operation to remove the screws from his leg is taking longer than expected. With just over five weeks of the campaign left, he could be absent for United’s last seven league fixtures.

JUST IN: Liverpool will get close look at ‘Sadio Mane successor’ after Benfica

Shaw was initially expected to miss games against Everton, Norwich City, Liverpool and Arsenal – a painful blow in itself. But he could also now be sidelined for the Red Devils’ home clashes against Brentford and Chelsea and trips to Brighton & Hove Albion and Crystal Palace.

His absence should mean Alex Telles is set for an extended run in Rangnick’s team after replacing Shaw at half-time against Leicester City and starting against Everton. But his unconvincing performance at Goodison Park will strike plenty of supporters with anxiety for the run-in.

Last Saturday’s damning defeat was a sickening setback in United’s pursuit of Champions League football next season. Later in the day, Tottenham Hotspur’s 4-0 win at Aston Villa rubbed salt in the wounds, edging Antonio Conte’s side six points ahead in fourth.

United’s current position in seventh puts them under serious threat of missing out on both the Champions League and the Europa League next term and succumbing to a spot in the Europa Conference League. But the club are level on points with sixth-place West Ham United with a game in hand, so there will be confidence Europe’s third tier can be avoided.

Want the latest Premier League news as we publish it on Express Sport? Join our brand new Facebook group by clicking here.