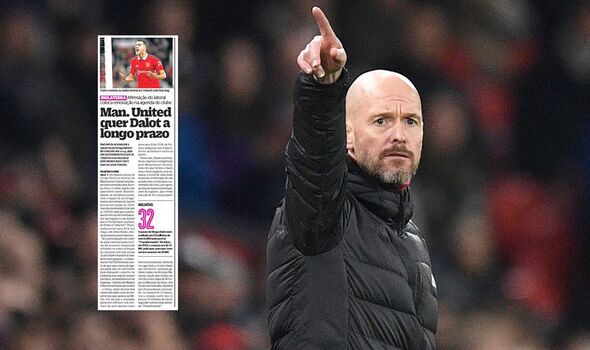 Manchester United are to accelerate their talks over securing the long-term future of Diogo Dalot, according to reports. Erik ten Hag is prioritising a long-term deal for the Portugal international after recently triggering a one-year option in his current contract.

Dalot has become a regular starter for United ever since the departure of Ole Gunnar Solskjaer as manager. He usurped Aaron Wan-Bissaka as the first-choice right-back under interim boss Ralf Rangnick last season and has remained a key member in the early stages of the Ten Hag era.

After initially joining United in 2018, and having had a loan spell at AC Milan for the 2020/21 season, Dalot finally seems to be at home at Old Trafford. His contract was set to expire at the end of this campaign before United triggered the option to extend the deal until the summer of 2024.

But that is not enough for the Premier League giants. Portuguese outlet O Jogo claims United are now pushing on with talks over a long-term extension for the 23-year-old.

Dalot is claimed to have attracted interest from across Europe following his performances this season, as well as the potential attractiveness of his contract situation. He would be able to speak to foreign clubs in January 2024 regarding a potential free transfer if he doesn’t sign a new deal at United by then.

O Jogo says United want to ward off interested parties by ensuring Dalot stays long term. The Red Devils want him to sign a five-year contract after he has become an undeniable starter for Ten Hag.

Dalot has only not started two Premier League matches all season. He missed the 3-0 win over Nottingham Forest on Tuesday due to a muscular injury but has been seen in training in the days since.

United are in the market for a right-back but that depends on the future of Wan-Bissaka. The 25-year-old was linked with a potential return to Crystal Palace in January.

However, he has impressed in both the Carabao Cup win over Burnley and league victory against Forest. After barely featuring for United before the World Cup, Ten Hag recently praised Wan-Bissaka for his recent performances.

He said: “First you have to be on the pitch, and in the first half of the season he was either injured or ill so he didn’t have a role in the squad. So I think the break was good for him.

“He returned, he was in the training camp in Spain and could play some games in preparation of the restart, and now he’s playing two games and he’s doing really well so I’m happy with his performance.

“We need competition in the squad. He has to play games in the team and then he can develop, then he can grow.”