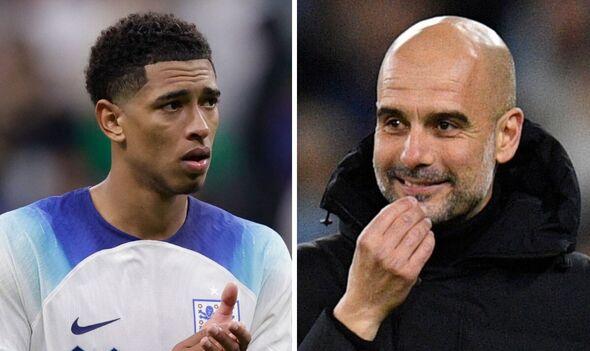 Manchester City are reportedly growing in confidence that they will come out on top in the race to sign Jude Bellingham next year. Liverpool, Real Madrid and City appear to be the frontrunners for Bellingham’s signature in 2023 with all three putting on a charm offensive to get their main target.

Liverpool fans were getting excited throughout the World Cup with both Jordan Henderson and Trent Alexander-Arnold seemingly building a close relationship with the midfielder. But reports in Spain have suggested that Real are currently leading the race ahead of Liverpool.

However, neither Real or Liverpool may be able to match City with The Sun confident that Pep Guardiola will be enough to sway Bellingham into moving to the Etihad. It is claimed that City officials are convinced that the prospect of working under Guardiola will be the deciding factor for Bellingham.

Guardiola only recently signed a new contract keeping him at the club until 2025. There had been some uncertainty on whether the Spaniard would want to stay in charge of City given his previous managerial track record.

He’s already surpassed the time he spent in charge of Barcelona and Bayern Munich at the Etihad. Guardiola spent four years in charge at Barcelona before spending just three years at Bayern.

If the 51-year-old sees out of his current contract at City, he would have been at the helm for nine years. With an extra three years of Guardiola at City, the club are now seemingly confident that they’ll be able to keep enticing Europe’s top talents to join.

Erling Haaland was convinced to join this past summer and it’s suggested the prospect of joining up with his former team-mate could also be tempting for Bellingham. City hold the British transfer record after signing Jack Grealish for £100million back in the summer of 2021.

It’s thought that any deal to sign Bellingham would need to smash that fee with Dortmund reportedly valuing the midfielder at close to £130m. But the report adds that Bellingham could be signed for just £83m if the entire fee is paid up front.

City look set to revamp their midfield in the coming years with Bellingham seemingly the man to lead the changing of the guard. Ilkay Gundogan is out of contract next summer while Bernardo Silva continues to be linked with a move away from the Etihad.