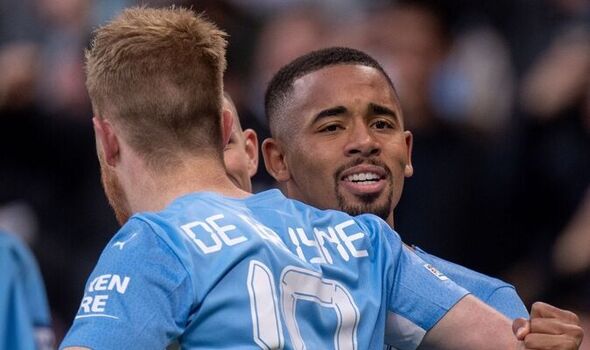 Kevin De Bruyne hopes Gabriel Jesus will stay with Manchester City this summer because the striker simply makes Pep Guardiola’s team better. The Belgian was very complimentary of his Brazilian team-mate ahead of City’s Champions League semi-final second leg against Real Madrid in Spain, making it clear that he hopes the Premier League leaders manage to keep hold of Jesus.

It’s understood City will consider offers for the forward this summer as he enters the final year of his contract.

Arsenal are the frontrunners for his signature and have already held extensive talks with his representatives, courtesy of technical director Edu.

But De Bruyne is of the opinion that City should be looking to keep hold of Jesus – as opposed to offloading him.

“Since he came here, I’ve had a good relationship with him (Jesus), he plays with so much energy,” De Bruyne said as he addressed the media in City’s pre-Real Madrid press conference.

“I’ve never any doubts on his quality. He’s still so young, I hope he can play many times with me because he makes us better.”

Reports regarding Jesus’ uncertain future at City appear to have sparked a purple patch for the 25-year-old.

He’s netted six times in his last three matches – including an impressive quadruple in the 5-1 win over Watford.

After the demolition of the Hornets, Guardiola detailed his delight at Jesus’ contribution while also praising his mentality…

He said: “I want to tell you something; Gabriel [Jesus] is our player. I don’t know what is going to happen, but he is a Man City player. When he has days like today, I am the happiest man in the world!

“Every player is happy when they play 90 minutes all the time but at the end of the season whether he wants to extend, stay or leave, I don’t know or don’t care.

“We have less than one month. My only concern is the players will do everything to try and win, after that no one knows what will happen.

“If one person in the world deserves nights like this, it’s him. There is no one on the backroom staff or who knows him that isn’t happy for him. When you are so positive and generous as he is in every way, life and football can reward you.

“When he has situations like this we’re happy for him because he’s so generous. It doesn’t matter what position he’s in, we know how he fights for his mates. He’s fantastic.”

Jesus has spent the majority of his City career on the bench as Sergio Aguero’s deputy.

Yet City have even opted to play with a false-nine over using the Brazilian international at various points throughout the season – despite Aguero’s move to Barcelona (now retired).

There have currently been no new contract talks between City and Jesus, whose deal is up in June 2023.