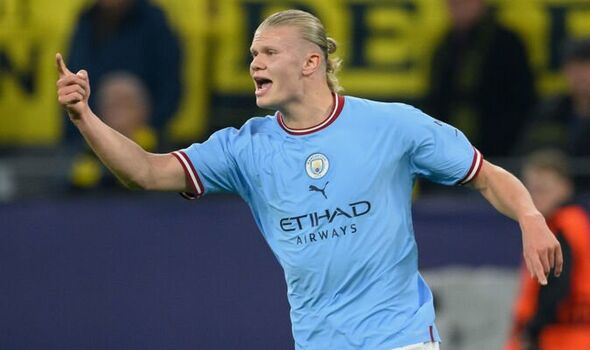 Erling Haaland will not feature in Manchester City’s Champions League clash with Sevilla next week, Pep Guardiola has revealed. The prolific star missed Saturday’s 1-0 win over Leicester with a foot ligament injury and is set to spend a longer period on the sidelines.

The Norwegian limped off during City’s goalless draw wit Borussia Dortmund in midweek and was ruled out for the Premier League meeting with Leicester. Guardiola has now said that the 22-goal forward could return for the fixture against Fulham on November 5.

“He won’t play against Sevilla because we’ve already qualified and hopefully against Fulham he can help us. If not he might play against Chelsea in the Carabao Cup.”

Julian Alvarez earned a rare start for City in Haaland’s place but the Argentine struggled to make an impact at the King Power Stadium. The January buy from River Plate was replaced midway through the second half having failed to trouble Leicester goalkeeper Danny Ward.

Instead, it was left to De Bruyne to score a sumptuous winner for Guardiola’s side. The Belgian struck a wonderful free kick into Ward’s top corner, with the ball pinging in via the top of the post.

De Bruyne’s wonder-strike was met with an approving tweet from stricken team-mate Haaland. The former Dortmund man tweeted a simple heart-eyes emoji alongside the midfielder’s username.

Meanwhile, Guardiola had urged De Bruyne to improve his performances and the 31-year-old responded perfectly. His manager warned rivals that the former Chelsea man is “back” following this excellent, match-winning display.

“Definitely. He’s back. He was not playing good the last games. He was amazing [today],” Guardiola told BT Sport.

“He knows it, he knows it. He’s a player we need the dynamic, how to be free, and the conditions… but it’s difficult.”

The Spaniard added on his side’s performance: “When they attacked more it was a game, they decided they could play like we could play and they couldn’t adjust. It is important not to get frustrated when you have problems to attack because it is so difficult. It was really complicated.

“A lot of credit to Leicester for what they have done but we did not get frustrated. When they changed the rhythm we could not change the rhythm. We had to suffer.”