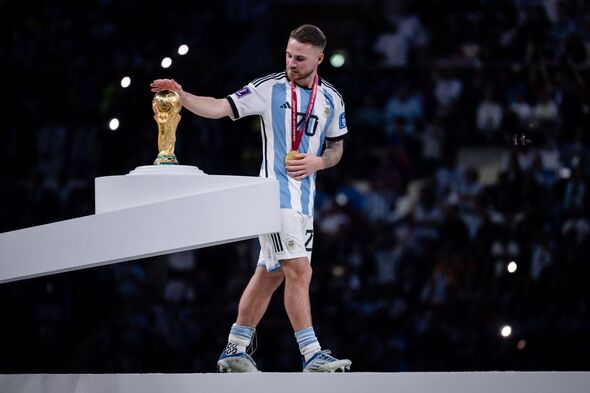 Alexis Mac Allister has reportedly decided he wants to join Juventus next despite interest from the likes of Liverpool, Arsenal and Chelsea. The Brighton midfielder’s stock has rose significantly in recent weeks off the back of his impressive performances for Argentina as they experienced World Cup glory in Qatar.

A number of the Premier League’s big hitters have been mentioned as possible suitors for the Argentine international, with Brighton facing an almost impossible task of keeping hold of him beyond next summer.

Liverpool, Arsenal and Chelsea have all been credited with an interest in the player while Tottenham, Manchester United and Manchester City are also said to be eyeing him up. However, Gazzetta dello Sport’s front page this morning claims Mac Allister has sent a message to Juventus by informing the club he wants to join them next.

Juventus had reportedly identified the 24-year-old, along with free agent Isco, as a key target ahead of the January transfer window. Sport Mediaset even claim that Juventus boss Massimiliano Allegri is prepared to sacrifice Weston McKennie in a bid to incorporate one of the two midfielders into his squad.

Juventus’ plan could well come to fruition in January with McKennie attracting a number of clubs after some high-level performances for the USA at the World Cup. Borussia Dortmund are understood to be leading the race for the combative American and could help the Italian side free up space for Mac Allister by launching a move for McKennie next month.

That would come as a huge blow to Liverpool, Chelsea and Arsenal, who all had hopes of landing the sought-after midfielder over the next six months. Mac Allister had emerged as a star man for Brighton before the World Cup, having scored five goals in 14 Premier League appearances this season.

But his stunning displays in Qatar – which saw him break into the Argentina first team and keep his spot alongside Lionel Messi – have propelled him into the limelight. Brighton, however, are digging their heels in and are insisting they do not want to sell Mac Allister despite several big-name clubs lining up offers.

Manchester United have a problem with Antony after Nottingham Forest win

Liverpool icon Graeme Souness, meanwhile, believes that it is only a matter of time before Mac Allister leaves Brighton despite his contract running up until 2025.

“He’s a top-four player and the big guys will be looking at him now and thinking, ‘We’ll have some of that’. He has proven he can play at the highest level and has already done it in the Premier League,” Souness wrote in the Daily Mail.

“There is very little risk attached to this boy. He can create, score and works his socks off – that type of player, they are hard to find. At 23, Brighton won’t be able to keep him for long and good luck trying to negotiate a new contract.”