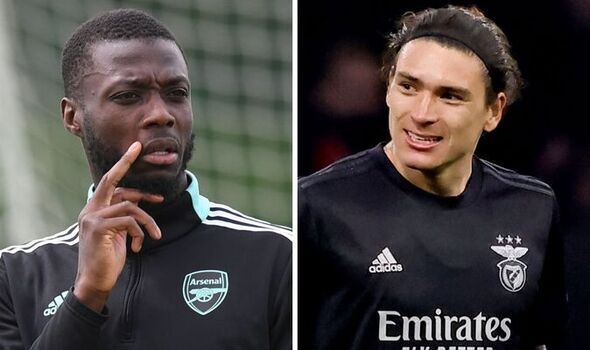 Premier League clubs are reportedly concerned that Darwin Nunez could end up following the same career path as Arsenal flop Nicolas Pepe with Benfica wanting around £85million for the forward. Nunez is the most in-demand forward for Premier League clubs heading into the summer transfer window.

Liverpool appear to be Nunez’s favoured destination, but the Reds are said to be put off by Benfica’s asking price. Manchester United, Arsenal and Newcastle are also reportedly in the race to sign the Uruguayan.

But any club hoping to prise Nunez away from Benfica will have to either smash or come close to breaking their club record transfer. Liverpool spent £75m on Virgil van Dijk back in January 2018 while Alisson is the club’s second most expensive signing after costing £67m later that summer.

The Reds used the money from Philippe Coutinho’s sale to Barcelona for both players while they looked for bargains elsewhere in the market. Nunez would present a breakaway from their usual transfer strategy, but a replacement for Sadio Mane will need to be signed if the Senegal international leaves for Bayern Munich.

There is reportedly some trepidation from Premier League officials on spending £85m on Nunez. And one recruitment chief used Pepe’s £72m move to Arsenal back in 2019 as an example of why Benfica’s asking price may prove too costly.

“His profile is perfect for the Premier League and he has Champions League experience but there are a few aspects of his game that need honing – and the biggest question mark is whether he’ll be able to cope with the intensity of a Premier League season,” they told i. “The sort of money being asked for him is huge and no club wants to do what Arsenal did with Nicolas Pepe, grossly over paying for someone because of the hype around the number of clubs interested in him.”

At 22 years of age, Nunez is regarded as one of the brightest young forwards in world football. He made a name for himself in La Liga 2 with Almeria, scoring 16 goals in 30 games before Benfica made their move for him in 2020.

It was in the Champions League where the Uruguayan began grabbing the attention of clubs around Europe as he scored twice in the 3-0 win over Barcelona in the group stage. He also scored the winner against Ajax in the last-16 clash before finding the net twice in the quarter-final tie against Liverpool.