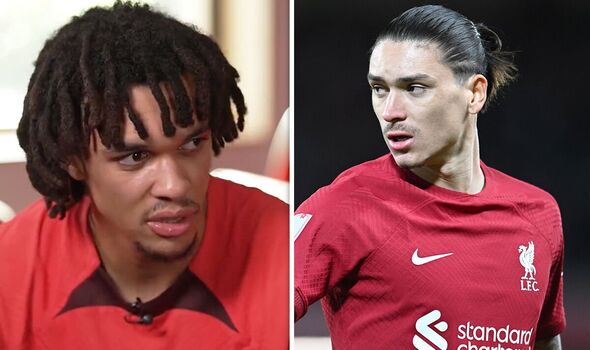 Liverpool right-back Trent Alexander-Arnold has hinted at his frustration at Darwin Nunez’s finishing in front of goal this season. But the England star insists everyone at Anfield is supporting the Uruguayan in his debut campaign.

Alexander-Arnold has laid on just one assist for Nunez so far this term. It came in last Friday’s FA Cup third-round tie against Wolves, where the forward cushioned in a delightful volley.

Nunez joined Liverpool last summer from Benfica for a fee that could rise to £85million. But it hasn’t gone quite to plan so far when it comes to his goal tally.

His strike against Wolves was his 10th in 23 matches in all competitions. But he has missed countless gilt-edged opportunities, which have cost Jurgen Klopp’s side.

Alexander-Arnold insists he has a good on-field relationship with Nunez. He says he has created good chances for his team-mate, hinting he has not been best pleased with his finishing.

Alexander-Arnold told Sky Sports: “I think if I’m being honest I think that chemistry and understanding has probably been there from early doors this season. It’s so easy when you look at it and see we’ve had one goal together all season and it’s like ‘maybe they haven’t found their wavelength’.

“But if you go back and watch some games or you watch the chances created and things like that, I’ve been putting balls in for him from early on in the season, and we just haven’t been able to score off them. So he’s a player that I think it’s easy to just write him off, it’s easy to just say he’s not scoring goals and that but he’s getting himself into areas and places where he’s able to hurt opposition, and that’s all you can really ask.”

Nunez is Liverpool’s second-top scorer this season, seven behind Mohamed Salah. Alexander-Arnold is confident he will start finding the net on a more regular basis and says the support from the club is there.

He added: “It means that when the goals do start coming, and we have faith that they will, no one here is thinking [that they won’t]. We’re all behind him, we’re all supporting him.

“It’s always good to see him on the scoresheet but as long as the team wins, I think that’s all that anyone really cares about.” Liverpool are next in action on Saturday when they travel to in-form Brighton.