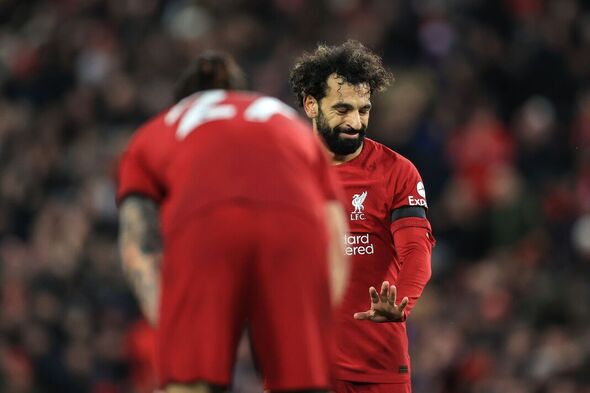 Liverpool came from behind to beat Leicester 2-1 at Anfield in the Premier League and the Reds somehow managed it without any of their players even scoring a goal. The Foxes went ahead early in the first half through Kiernan Dewsbury-Hall before defender Wout Faes put two into his own net to gift the Reds the lead. It would prove to be enough to earn all three points. Express Sport rates the Liverpool players in the crucial victory that ended 2022 on a high.

Solid enough game but may feel as though he could have done better for the opening goal.

Kicking was very good, went long to Darwin Nunez in the second half and he nearly grabbed Liverpool a third goal.

Smart tackle to cut out a through ball at the back post to Harvey Barnes from Jamie Vardy in the first half.

His cross saw Wout Faes slice home the equaliser when Liverpool were struggling to get going. Defended very well.

Poor for the Leicester opener, got sucked out of line and it was ruthlessly punished by Kiernan Dewsbury-Hall. Recovered well though and was a threat going forward as you would expect.

Decent game from the big Liverpool defender. Read several dangerous Leicester openings and displayed speed and strength to cut out the danger. Was slightly sloppy with his passing but generally solid.

Sloppy by his standards. Won’t be happy with his performance, even more so after he was forced off with a niggle. Lucky not to be booked for a lunging tackle, also stepped up for the opener when he didn’t need to.

Made a superb tackle to stop a Leicester counter-attack when he won the ball off Harvey Barnes. Always positive and trying to move the ball forward, even if it didn’t always come off.

Passing was way off. Really frustrating display from the usually-dependable skipper. Struggled to complete basic passes and put Liverpool under pressure losing possession on two occasions.

Still done well to snuff out several promising Leicester counter-attacks but not his best showing this season.

Quiet. Looked bright in patches and was fouled numerous times but still struggled to make a statement after returning to the side.

Poor by his standards. Snatched at chances despite putting the ball in the net following an offside call against Alex Oxlade-Chamberlain. Spurned a glorious opening in the second half when he rolled the ball wide.

Shot straight at Danny Ward on 72 minutes, wasn’t quite his evening.

Not as impressive as his contribution at Aston Villa. Kept running into trouble and taking heavy touches. Didn’t look happy to be subbed but that’s the story of his Anfield career which is now sure trickling to an underwhelming end.

‘Caption Chaos’ as Jamie Carragher calls him. Another wild game that saw Nunez lacked composure but he was still effective. Right at the heart of the second Liverpool goal after Wout Faes turned into his own net following the Uruguayan’s shot.