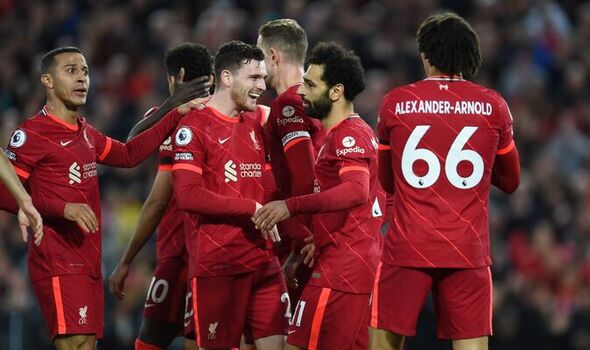 Liverpool were at the imperious best at Anfield on Tuesday night as Jurgen Klopp’s side tore Manchester United apart in a pulsating 4-0 win with goals from Luis Diaz, Sadio Mane and Mohamed Salah. Express Sport brings a run down of how Liverpool’s players rated in their dominant win.

Nothing to do in the first half with United failing to register a single shot on target. Quietest night any Liverpool goalkeeper has likely had against United.

A constant threat down the right and a menace for Diogo Dalot throughout the match.

Long gone are the days of Matip being an unsung hero. Played his role in Liverpool’s masterful second goal.

Was untroubled throughout the opening 45 minutes with Marcus Rashford failing to put up much threat. Had a few iffy moments in the second half but still stood firm.

Much like his team-mate down the opposite wing, Robertson was a constant outlet and providing space for the likes of Diaz, Mane and Salah to thrive further forward.

JUST IN: Paul Pogba ‘may have played last minutes for Man Utd’

Usually needed in a much deeper role but United’s lack of threat granted Fabinho more freedom to roam and start Liverpool’s attack.

Injury issues long gone now and Thiago is discovering his best ever form of late in a Liverpool shirt. Ran the show in midfield from the very first minute.

A true captain’s performance and arguably the heartbeat of Liverpool’s midfield in big matches.

Has come under criticism of late in part due to the very high standards he has set but was simply sublime against a sub-par United side. Back to his best in front of the Anfield faithful.

Simple a revalation since his January arrival and has transformed Liverpool’s attacking line-up. A goal and assist just like his fellow frontmen.

Came on for Diaz and then played his part in Liverpool’s fourth, providing the assist for Salah’s second.