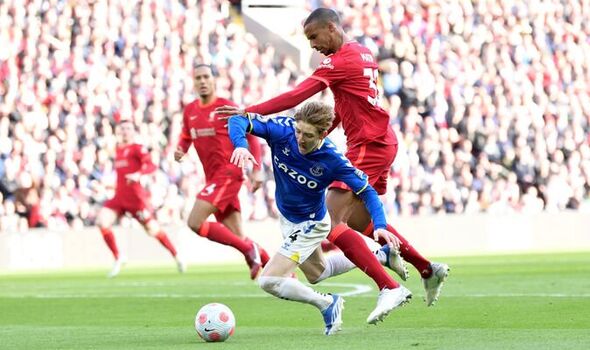 Liverpool icon Ian Rush believes Everton have a diving problem and has called out two Toffees stars for going to ground too easily in last weekend’s Merseyside derby. The former striker has slammed forwards Anthony Gordon and Richarlison for trying to get Reds players into trouble.

Gordon was booked for simulation in the first half when he went down under a challenge by Naby Keita. The 21-year-old also appealed for a penalty in the second half when he battled with Joel Matip as he drove into the box.

Everton boss Frank Lampard claimed referee Stuart Attwell would have pointed to the spot had it been Mohamed Salah going down. Lampard – whose side are now in the Premier League relegation zone – has been asked by the FA to explain his comments.

Rush believes players going down too easily has made a referee’s job even harder. “Much has been made of the Everton penalty claim. The problem referees have with 50-50s like that is that players go down far too easily these days, making it more difficult for the ref to make a decision,” Rush told gambling.com.

JUST IN: Liverpool vs Villarreal prompts Ferdinand into ‘greatest ever’ claim

“I’m not just talking about Gordon by the way – Richarlison went down too easily at least three times. It’s no coincidence Everton have more yellow cards for diving than any other side in the league this season.

“I understand Everton’s approach, they needed to do whatever they could to try and get a result out of a difficult game, but it wasn’t pretty, and it didn’t work because Liverpool eventually broke them down.

“Frank Lampard may end up in a bit of hot water with the FA over his post-game comments but I don’t think he meant anything by it really, that was just his way of dealing with the frustration. Maybe that was just a little bit of inexperience as a manager from Frank and when things don’t go your way you get frustrated and say things you might regret. He’s only human.”

Everton have apparently asked the PGMOL for an explanation over the decision not to award a penalty for Matip’s challenge. They received an apology from refereeing chief Mike Riley earlier this season when Michael Oliver failed to award a spot-kick for a handball by Rodri of Manchester City.

Rush continued: “Everton supposedly want answers from the Premier League’s refereeing body about the decision not to award them a penalty, but there’s a big difference between this incident and the one against Manchester City earlier in the season.

“The one against City was a stone waller and they quite rightly received an apology for not getting it…I’d be surprised if they get an apology for this one though.”