Liverpool boss Jurgen Klopp is blessed with an abundance of young hopefuls at Anfield who are itching to get their chance in the first team. And while the German boss knows that kids alone cannot win him a second Premier League title, there is a certain responsibility attached to developing them now that he has extended his deal to 2026.

Klopp has already seen first-hand how good his academy graduates really are, having fielded several of them last season against Shrewsbury in the FA Cup and before that against Aston Villa.

But the true test to making it at Anfield is top flight football — and only a select few will be lucky enough to experience that this season. With that in mind, Express Sport picks out five candidates to break the mould and work their way into the tactician’s plans for the upcoming campaign. 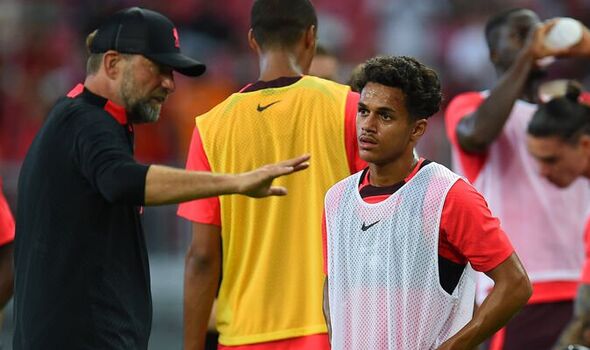 It may be unfair given that he is of a similar age to some of Liverpool’s other budding talents who are knocking on the door, but there is already an expectation that Carvalho will get some meaningful minutes this season.

The 19-year-old arrived in a deal worth £8million from Fulham, having been pursued by Liverpool for the best part of 12 months. Straight away, the winger was taken on the club’s tour of Asia and he showed glimpses of his ability despite a heavy 4-0 defeat to Manchester United.

There are similarities between Harvey Elliott and Carvalho in terms of how the pair can be utilised within the squad. And with a long season ahead, Klopp will have no qualms with picking the attacking midfielder to come in and do a job for the Reds when required.

Gordon doesn’t turn 18 until October, but he has already played in the Premier League and started at Arsenal in the semi-final of the Carabao Cup.

A skilful winger with excellent finishing ability, the former Derby County youngster proved he was unfazed by senior football after scoring against Shrewsbury in the FA Cup, prompting Klopp to label the youngster “a special kid”.

While the 54-year-old did his best to keep Gordon grounded, there are some figures inside Anfield who believe the Reds attacker is destined for the top. The only challenge now is to prove he can mix it with the senior squad on a regular basis.

Liverpool were expected to launch a mammoth bid for Borussia Dortmund starlet Jude Bellingham this summer, but their £100m mooted bid never materialised. And the progress of Morton is one of several reasons why their interest has been parked, at least for now.

The 19-year-old made nine first-team appearances last season, including two in the Champions League, to mark his meteoric rise at Anfield. Operating as an all-action midfielder at the heart of their midfield, Morton has displayed composure and maturity when playing for the Reds as a No 8.

It was understood that he could follow in Elliott’s footsteps by moving on loan to Blackburn Rovers. But it appears Klopp has blocked his temporary switch due to injury concerns within the squad — hinting that Morton could have a role to play again this season after featuring against Salzburg in pre-season. 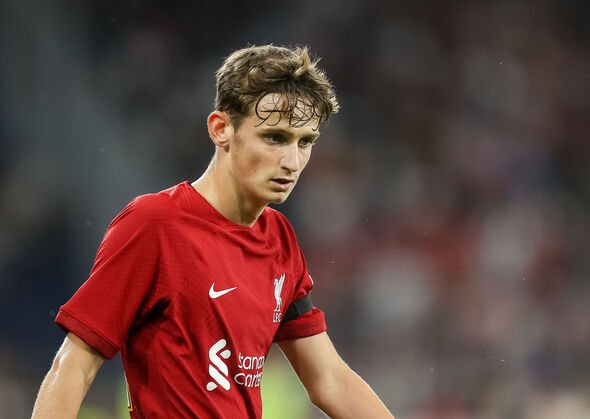 Still only 17, Bajcetic only joined Liverpool from Celta Vigo 18 months ago. The son of former Serbia international Srdan Bajcetic, the youngster represents Spain at international level and has proved to be a shrewd addition to the club’s academy setup.

Having already featured for the Under-21s, excitement is growing at Anfield as to how high he can go after the promising defender was included in the squad for the Merseysiders’ pre-season tour of Asia.

His versatility means he can operate as a centre-back or holding midfielder. And while Klopp is well-stocked in those positions, there remains a possibility Bajcetic could get a chance to impress in the early rounds of the FA Cup and Carabao Cup.

It may be a while yet before we see Clark celebrating in front of the Kop after the club’s £80m signing of Darwin Nunez. But the 17-year-old has mapped out his future at Anfield after penning a professional contract in February earlier this year.

The promising striker — poached from Newcastle as a youth scholar — scored 13 goals for the Under-18 side last season, highlighting his prowess in front of goal. But he certainly his some pedigree after following his father, Lee, in making it as a footballer.

Clark has already trained on several occasions with the first team and was on the plane like Carvalho and Bajcetic for the pre-season trip to the Far East. He is rated as a top talent by Liverpool youth coaches and it may not be long before he gets his first chance to impress under Klopp.