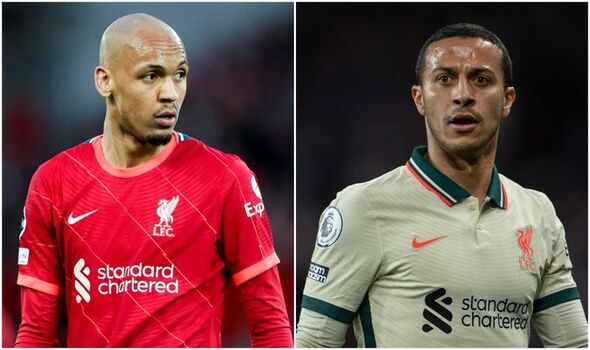 Liverpool have been handed a major boost ahead of their Champions League final clash with Real Madrid as key midfielder Fabinho returned to training ahead of Saturday’s showdown, according to reports. Fellow Reds ace Thiago Alcantara did not take part in the Reds’ Wednesday session but will apparently be given ‘every chance’ of taking part against Los Blancos.

Jurgen Klopp’s side face Real Madrid for a chance to win a treble of titles in 2021-22. They missed out on the Premier League by a point, but have already won the Carabao Cup and the FA Cup this term.

Liverpool had to do without Fabinho and Thiago for the final few weeks of the season. The former has not played since hobbling off with a hamstring tweak during the 2-1 win over Aston Villa on May 10.

JUST IN: Paraguay legend unloads on Grealish after ‘talking s***’ about Almiron

Fabinho trained ahead of the Champions League final on Wednesday, telling journalists “all good, I’ll be ready” as he walked back into the the building at Liverpool’s training base. However, Thiago did not take part in the session but it is thought that he will be given ‘every chance’ in a bid to take part in the showpiece event.

The 31-year-old playmaker set up Sadio Mane with a fantastic backheel as Liverpool equalised against Wolves on Sunday. But he hobbled off soon after – with Mohamed Salah and Andy Robertson scoring second half goals.

Klopp effectively ruled out the former Barcelona man after the game, telling journalists: “I think he’ll be out of the final but I don’t know. He’s limping, so it’s maybe not the best sign.”

But it is now believed that he will be given an opportunity to prove his fitness in the next 72 hours. Klopp is seemingly therefore much more upbeat about having Thiago available to face Madrid in Paris.