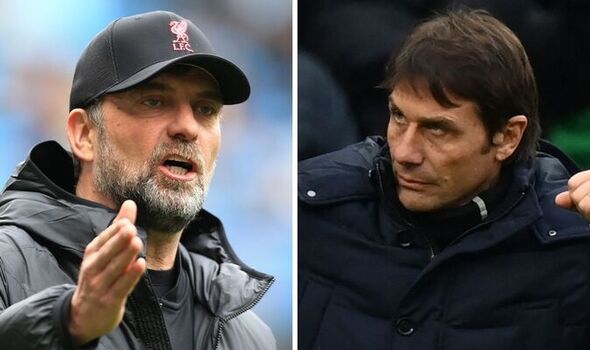 Liverpool missed out on a chance to leapfrog Manchester City to the summit of the Premier League heading into the final few weeks of the season and Stephen Warnock believes there’s real “danger” on the horizon now for Jurgen Klopp’s side in the form of Tottenham’s visit to Anfield. The game at the Etihad certainly lived up to the billing with both sides playing at the top of their game.

A pulsating 2-2 draw saw both teams share a point at the end of the match, leaving City top of the table by one point. There are just seven games left for the two title contenders and there may well be more twists and turns before the season is over.

Both teams will face matches against Aston Villa, Newcastle and Wolves, but Liverpool arguably have the harder run. Wolves and West Ham are the only top-10 sides who City will face between now and the end of the season.

Liverpool’s next two Premier League matches come against arch-rivals Manchester United and Everton respectively. But it’s the match on May 7 which has Warnock more “concerned” than any other fixture for Klopp’s side.

Liverpool host Antonio Conte’s Tottenham side at the start of next month with Spurs beginning to hit good form. They’ve recorded four consecutive wins with Son Heung-min, Harry Kane and Dejan Kulusevski all finding the net with ease in recent weeks.

And Warnock believes Tottenham’s front three will cause problems for Liverpool’s defence.

“I look at the front three and I think they are equally as good as any front three in the Premier League right now, the way they are playing. That’s the danger.”

Liverpool drew 2-2 with Tottenham in the reverse fixture back in December with Andy Robertson being sent off moments after Son equalised for Spurs. That game proved to be a feisty affair throughout with Paul Tierney brandishing nine cards altogether.

But Liverpool know they can ill afford any slip ups between now and the end of the season to catch City.