Supercars, Covid tests, hydrotherapy, an incredible training ground… and a breakfast of omelette and baked beans! Leicester and England star James Maddison reveals a ‘day in the life’ of a pampered Premier League footballer

Leicester star James Maddison has posted a revealing behind-the-scenes look at what life is like for a Premier League footballer.

Top-flight players are expected to live flashy lifestyles, due to their mega-money salaries, driving expensive cars, living in huge homes and possessing plenty of valuable items.

Rarely though does a player give unique access into their lives off-the-pitch, which is something the England international has done on social media platforms TikTok and Instagram. 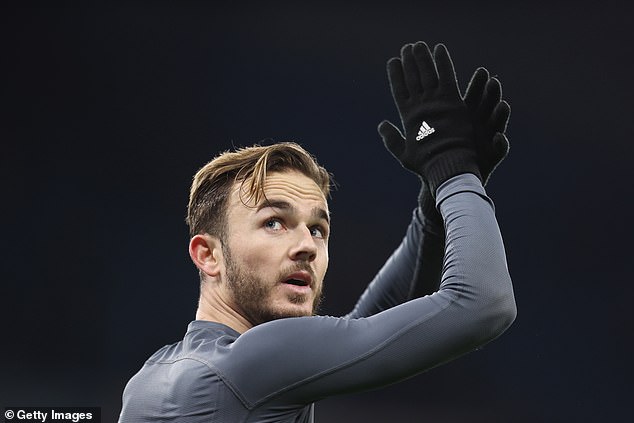 He posted a video set to the song ‘Day in the Life’ by London rapper Central Cee showing what a typical day looks like for him.

The video starts with Maddison showing off his gigantic wardrobe where he boasts a huge collection of designer trainers and clothes.

He then has a little play with his son, Leo, who was born earlier this year, before getting in his Lamborghini and driving to Leicester’s impressive Seagrave training ground.

Not everything is so glamorous about a footballer’s current lifestyle though, as Maddison gets a swab up the nose for his Covid-19 test as he arrives at the ground.

The playmaker gives a tour of Leicester’s facilities in Seagrave – including the canteen dressing room, treatment table, gym, hydrotherapy and performance analysis area.

For breakfast, he has an omelette with beans and he is seen greeting his Leicester team-mates Hamza Choudhury, Harvey Barnes and Wesley Fofana – with the latter recovering from his fractured fibula and ankle ligament damage sustained in pre-season.

During his tour of the facilities, Maddison is shown pushing team-mate Choudhury into the swimming pool from behind.

After training is finished, he returns home to walk his dogs and spend more time with his son.

Maddison has previously picked up a good reputation for coming across as one of the Premier League’s most chatty and open players in post-match interviews.

His interviews and the way he speaks about the game was described as a ‘breath of fresh air’ after Leicester’s victory over Chelsea at the start of the year.

Maddison has been one of the club’s star performers in recent weeks, with six goals and five assists in his last nine appearances.

He was part of the Leicester side who beat Liverpool 1-0 on Tuesday and looked to have put Mo Salah off for his missed penalty in the first half.

He was seen attempting to put the Egyptian off as he stepped up from 12 yards, before his effort was saved by Kasper Schmeichel.