Midfielder Kiernan Dewsbury-Hall set up Leicester City’s first goal and scored a sublime second as they leapfrogged opponents Crystal Palace to go ninth in the Premier League after a tense 2-1 win at the King Power Stadium on Sunday.

Burnley lost to Norwich and Brentford beat West Ham in the day’s other early starts. 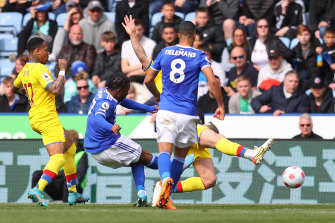 In Leicester, Dewsbury-Hall picked up the ball in midfield and threaded a well-timed pass for winger Ademola Lookman, who fired past Palace goalkeeper Vicente Guaita with 10 minutes remaining in the first half.

Minutes later, Palace defender Marc Guehi miscontrolled the ball in his own half, allowing Leicester forward Patson Daka to find Dewsbury-Hall. The midfielder curled a powerful shot from 18 yards to score his first Premier League goal seconds before halftime.

Wilfried Zaha gave Leicester reason to sweat after halving the deficit in the 65th minute, heading in the rebound from his retaken penalty after his first attempt was saved by Kasper Schmeichel.

Brentford continued their resurgent form by beating West Ham United 2-0 at home to rack up a fourth win in five matches and take another step towards safety.

Fresh from their shock 4-1 win at Chelsea last week, Thomas Frank’s side overwhelmed another side with European ambitions.

Brentford struck first after quick-thinking following a throw-in as Toney slipped the ball into the path of French forward Mbeumo, who slotted into the net with a first-time finish in the 48th minute.

Mbeumo repaid the favour by crossing for Toney to head home from close range in the 64th and Brentford comfortably saw out the win to climb 12 points clear of the relegation zone.

The result was a further blow to West Ham’s hopes of finishing in the top four.

Burley miss a trick against the Canaries

At Carrow Road, Burnley squandered an opportunity to close the gap to Premier League safety, losing 2-0 to bottom club Norwich.

French midfielder Pierre Lees-Melou opened the scoring for Norwich in the ninth minute when he slotted the ball into the corner with a shot from outside the box.

The home side fended off multiple attempts by Burnley to find an equaliser before Teemu Pukki put the game out of reach with a goal in the 86th – a fine finish from the right after a through ball from Mathias Normann.