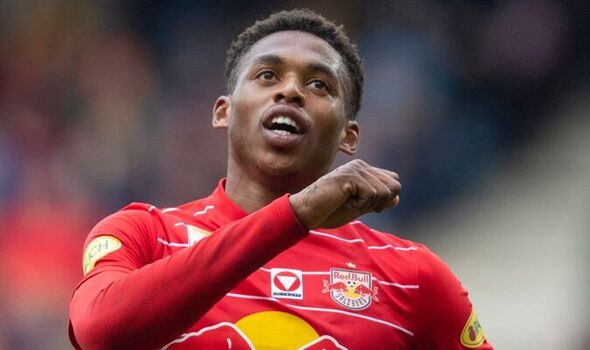 Leeds are lining up a third raid on RB Salzburg for the Austrian club’s young striker Junior Adamu, according to reports in Germany. The Whites have already done significant business with Jesse Marsch’s former club this summer having signed long-term target Brenden Aaronson for a fee in the region of £22.2million.

His former team-mate Rasmus Kristensen is also on his way to Elland Road too, after the Whites shook hands on a move with Salzburg for an undisclosed fee.

The 24-year-old has also agreed a contract with Leeds, where he is expected to become the club’s first-choice right-back.

According to Sky Germany, Leeds’ summer business with Salzburg still may not be done there with 21-year-old forward Adamu now in their sights.

The youngster hit seven goals in 30 Austrian Bundesliga matches last season and is considered to be one of the most highly-rated attackers for his age, in all of world football.

The 28-year-old played just nine of the campaign’s 38 Premier League matches, having previously featured in every game the prior season.

There is plenty of other interest in Adamu though, who is also on the radar of West Ham and Southampton.

German clubs Hertha Berlin, RB Leipzig and Eintracht Frankfurt are also interested and the race is starting to hot up.

Adamu is contracted with Salzburg until 2025 but the club would reportedly be willing to sell for a fee in the region of £8million-£12m.

Salzburg are no strangers to a sale having moved on a whole host of impressive names in the past few years.

The likes of Erling Haaland, Takumi Minamino, Dominik Szoboszlai, Hwang Hee-chan, Patson Daka and Enock Mwepu all elevated their game to the next level in Austria.

Speaking towards the end of May, Leeds boss Marsch revealed he’d received assurances from the board that there was money to spend – whether the club would be playing Premier League or Championship football next season.

“We’ve not had any communication other than to say they (the board) have done some behind-the-scenes planning to make sure we’re in good shape in any direction the season may go in,” Marsch said.

“That financially with the player pool, what the future may bring, that we’re very secure and able to move forward in a positive direction, which they said to me at the very beginning.

“They were clear that they had a plan, they were able to map out what some of that plan looks like – there is clarity already.

“In that sense, they’ve kind of left me alone to not have to focus on anything other than the job at hand and do everything I can to keep us up.”