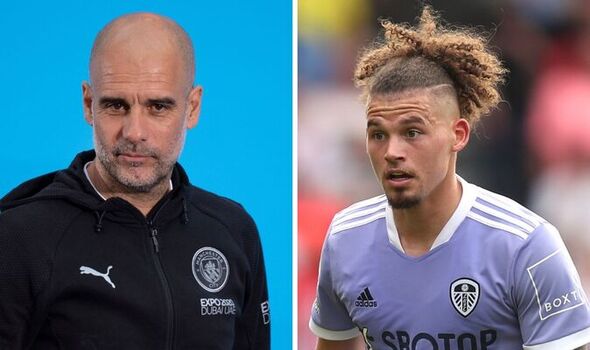 Leeds may be powerless in trying to keep Kalvin Phillips with Manchester City ready in the wings to test their resolve this summer, according to reports. Leeds have been one of the busiest Premier League clubs in the transfer market so far with £35million spent on Rasmus Kristensen and Brenden Aaronson while Marc Roca is set to arrive for £10m.

All three players hint at the kind of team Jesse Marsch is trying to build in his first summer transfer window as Leeds boss. The former MLS manager is keen to build a squad capable of avoiding another relegation battle next season.

Phillips will likely play a key role as part of Marsch’s plans, but being able to keep the midfielder at the club for another season may prove to be the Leeds manager’s biggest task. The 26-year-old’s influence at Leeds was clear to see last year as they lost just six of the 20 Premier League games he played, as opposed to the 12 defeats in 18 matches Phillips didn’t feature.

But The Athletic suggest that Leeds are currently on edge with the understanding that City will soon make an official bid for their star midfielder. It is claimed that City are hopeful of pushing through a deal worth in the region of £50m.

JUST IN: Leeds ‘reach agreement’ and set to confirm £12m deal this week

And the Premier League champions also feel that Phillips would ‘push to take up the opportunity’ if City made their intentions clear. Pep Guardiola is keen to bring in a replacement for Fernandinho with the Brazilian leaving after nine seasons at the Etihad.

City are said to have held ‘more intense’ conversations about signing Phillips once Fernandinho confirmed he would not be signing a contract extension. The Premier League giants have missed out on the chance of signing Phillips on a cheaper fee as it’s claimed he has a ‘relegation-related release clause’ in his current contract.

Leeds now hold a stronger negotiating position, although it appears they’re waiting to make an official bid until Phillips finalises his agency switch. The England international has reportedly been looking to leave Palm Sports Management with Stellar named as the ‘frontrunners’ to take him on.

Once Phillips resolves his off-field matters, City are expected to make a formal offer to Leeds. Losing Phillips would come as a huge blow to Leeds’ plans for the new season, with Raphinha also strongly tipped for a big-money move elsewhere.

Both Phillips and Raphinha are seen as the main stars at Elland Road and a key reason why they avoided relegation last season. Finding replacements won’t be easy, but if both are sold early in the transfer window at least they’ll have time to look around the market.