Nantes 0-3 PSG: Kylian Mbappe stars for PSG as the French forward bags a brace before Nuno Mendes adds a third against the ten men of Nantes… as the Parisians regain top spot after unbeaten start to the season

PSG reclaimed top spot in Ligue 1 after Marseille had briefly occupied first place, with a 3-0 win over Nantes courtesy of a Kylian Mbappe brace and Nuno Mendes’ second-half strike.

Mbappe opened the scoring after just 18 minutes, before the home side were reduced to ten men following a high challenge from Fabio on Vitinha resulted in a straight red with just 24 minutes on the clock.

The French forward then made it two on 54 minutes after breaking at pace through the middle before playing a one-two with Lionel Messi and tapping in, with the goal passing a VAR check for offside.

Portugal’s Mendes then added a third on 68 minutes after reacting first to Neymar’s shot, which clattered off the crossbar, with the Brazilian replacing Mbappe. 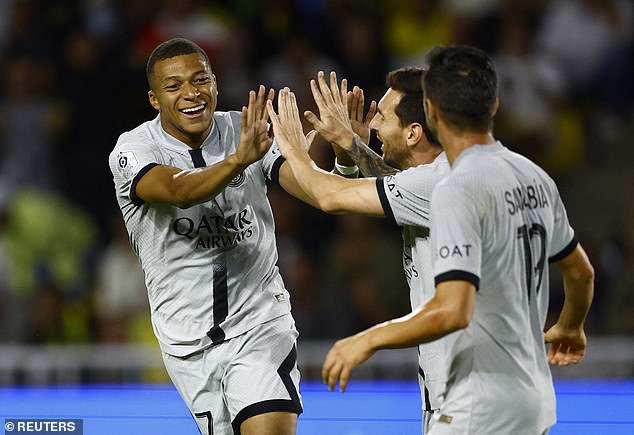