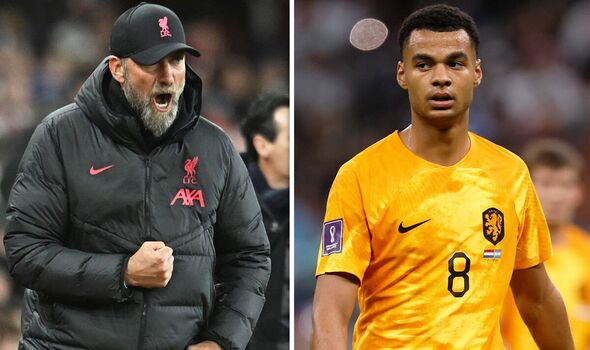 Liverpool boss Jurgen Klopp begged the club’s board to beat rivals to the signing of Cody Gakpo, according to reports. The Reds have won the race to sign the Netherlands star ahead of Manchester United.

PSV Eindhoven announced on Boxing Day that a deal had been agreed with Liverpool over the sale of Gakpo. The forward is set to sign a six-year contract at Anfield and join for a fee of around £45million.

Gakpo had long been linked with a move to Liverpool’s bitter rivals United. But the Red Devils have lost out on one of the stars of the recent World Cup.

The Sun claims United prioritised other signings ahead of Gakpo, believing they could keep a deal for him on ice. But Liverpool moved fast to nip in ahead of Erik ten Hag’s side.

Klopp is said to have begged the Liverpool board to move fast to seal a deal. The German feels Gakpo can play a part in saving the club’s season.

Liverpool won their first Premier League match back after the World Cup. They beat Aston Villa 2-1 on Boxing Day, just hours before news of Gakpo’s move was announced.

But the Merseyside club are still down in sixth place in the table, 15 points behind leaders Arsenal. Liverpool lost to Manchester City in the Carabao Cup last week but still have the FA Cup and Champions League as potential silverware this season.

Gakpo will arrive in England after having a fine first half of the campaign in the Eredivisie. He has nine goals and 12 assists to his name in 14 appearances in the Dutch top flight.

He netted in each of the Netherlands’ three group stage matches in Qatar. However, Louis van Gaal’s side were ultimately beaten in the quarter-final stage by eventual winners Argentina.

United, meanwhile, beat Nottingham Forest 3-0 on Tuesday to seal a winning return to league action. After the match, Ten Hag refused to comment on Gakpo but insisted the club are on the lookout for a striker.

He told Amazon Prime Video: “I don’t talk about individual cases. We are looking for a striker, it would be good with so many games coming.

“We want to stay in all the leagues we are playing in and you need numbers in the squad. We are aware we lost a striker, so I think we have to get a striker in, but it has to be the right one.

“The right one is a player that brings quality to the team, not just adding to the squad because that only gives you problems. And, you know the criteria is high here at Manchester United.”