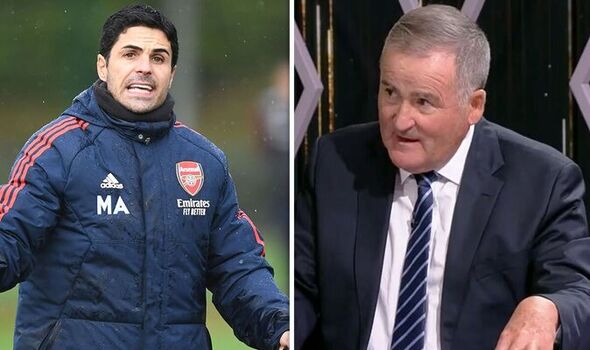 Former Liverpool midfielder Danny Murphy has backed Richard Keys’ criticism of Arsenal boss Mikel Arteta. Murphy says Arteta, and any manager who steps outside their technical area, should be yellow carded and then sent off for the offence.

Keys again hit out at the Gunners manager at the weekend. He aimed a tweet at the PGMOL during Arsenal’s 1-0 win at Chelsea.

The beIN SPORTS presenter has previously claimed Arteta will cause an injury to either himself or a player if he continues to stand too close to the pitch. Keys posted a picture on Twitter showing the Spaniard well outside his technical area.

Murphy agrees with Keys that something must be done. However, he says Arteta is not the only manager guilty of drifting out of their designated zone.

The pundit reckons managers should be booked the first time they step out of the area and then receive a red card if they do it on a second occasion. Murphy told talkSPORT: “I agree with [Keys]. It’s not about Arteta though, it’s all managers.

“The rules are too lax, the punishments are very rare. It should be as soon as you go out, yellow card.

“If you go out of it twice, red. Done. Dead easy. It would stop in about two weeks.

“The problem is you’re always going to get those people who go ‘we want to see the passion’ – there’s a big box there, there’s lots of room for you to be passionate and jump on your staff and your fellow colleagues.

Keys has previously written in his blog that he finds Arteta’s touchline behaviour “extremely irritating”. And on Sunday he called on the authorities to take action.

He tweeted: “Why is this allowed every week @FA_PGMOL. Arteta has been jumping up & down all game – way outside his technical area. [Graham] Potter is in his & 4th [official] is watching. Do something about this man.”