Having scored City’s first goal in their pulsating 2-2 draw with Liverpool, De Bruyne then treated his children after the game.

In a clip shared to social media platform TikTok titled ‘My biggest support’, the Belgian’s day from leaving the house to meeting his family in the tunnel post-match was documented.

The video begins with De Bruyne being embraced by one of his sons before he leaves to go to the ground before it then transitions to two of his children sat in the back of the car on the way to the game.

Both Mason and Rome, De Bruyne’s two sons who feature most prominently in the video, don their names with the Belgian’s no. 17 on the back.

The clip then moves on to show the family of City’s captain for the day celebrating his early goal in a box suite. 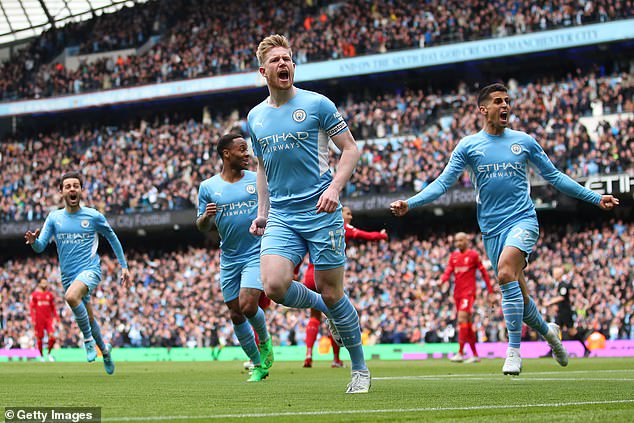 Following the conclusion of the game in which both sides missed opportunities to win it, the video then shows a very sweet moment in which the midfielder’s sons run towards him in the tunnel.

Leaving the ground with his family after the game, De Bruyne can be seen driving them through a local McDonald’s ‘drive thru’ treating them to a happy meal following his superb performance.

The clip then goes full circle and ends with De Bruyne and his wife getting home with their three children appearing as happy as ever.

Meanwhile, following the game De Bruyne also spoke to reporters and poured scorn on the idea that if one side had won they would certainly have gone on to win the league. 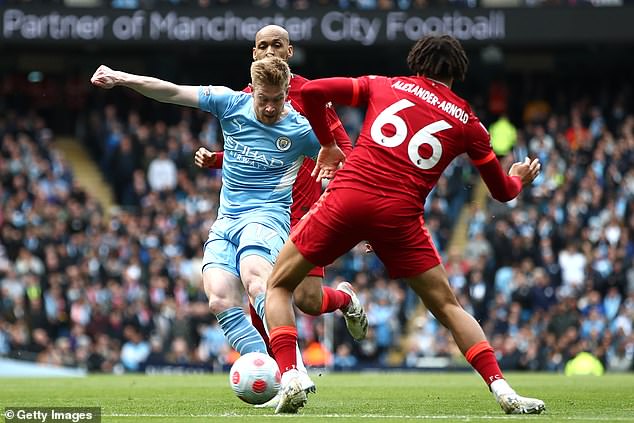 He said: ‘I know people said whoever wins gets the title. But I don’t think the teams think that way, the schedule is way too tough for both teams to win all their games.’

He went on to add: ‘Today we played very well, I think we had the upper hand. This is the way we need to play the rest of the season.

‘We should score more. It is what it is. It was a great game. I think it should be more before half-time but we were still winning.

‘The way the second half started is the disappointment. I think we played great and created enough chances to win the game.’