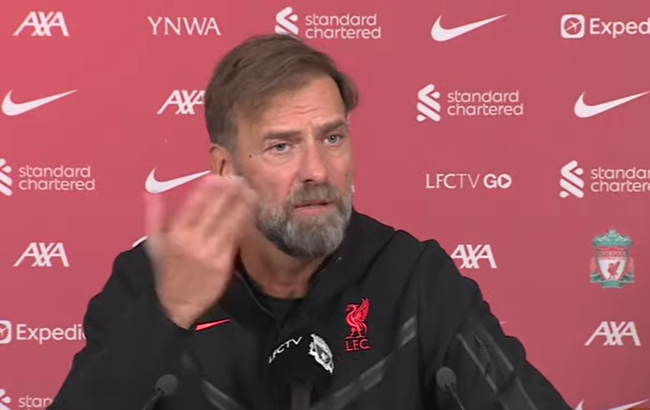 Liverpool manager Jurgen Klopp lost his cool with a reporter after being quizzed on Liverpool’s January transfer activity.

Cody Gakpo joined the Reds in a £37million deal at the beginning of the month but that is likely to be the club’s only incoming business, despite a spate of injuries across the squad.

Liverpool are currently seven points off fourth place with Klopp’s side taking on Brighton at the AMEX Stadium on Saturday. The Seagulls will move ahead of their opponents with a win, with the race for Champions League qualification intensifying each week.

Having already explained more January business is unlikely, Klopp was quizzed again during a press conference on Friday, asked if it was an issue of players simply not being available, whether it is a financial problem or a combination of the two.

An unimpressed Klopp however took exception to the question, responding: ‘I have had maybe 6000 press conferences at Liverpool and you were part of maybe 5999 of them. You were always there. Come on.

‘Do I have to tell you again the money story? What could be the reason that we have money like crazy but we don’t buy the players even when they are available.

‘Why would you ask the question when the answer lies on the table?  I don’t understand that, this this is the question you ask and you know the answer.

‘If I sat here and said, ‘yes we have massive money in the bank, we don’t know what to do with it, the players are not there’. We don’t do that.

‘On top of that we have the problem that in the moment, four of our offensive players are injured.

‘If we buy another one and they come back, not tomorrow but they will come back, then we have seven strikers. We couldn’t even put them all on the Champions League list. It’s just not that easy, you cannot sort the problems [like this], especially with injuries.

‘Injuries, they are the main thing, the big, big shadow over all of us. We cannot solve that in the transfer window. Sometimes you have to. But usually you have just got to get through until the boys get back. Then you can use them again.

‘But the transfer market is not for us at this moment, not for us. It is not the solution. But if something is out there and somebody tells me yes we can do it, we can do it.

‘But for this specific situation I don’t think it will happen.’