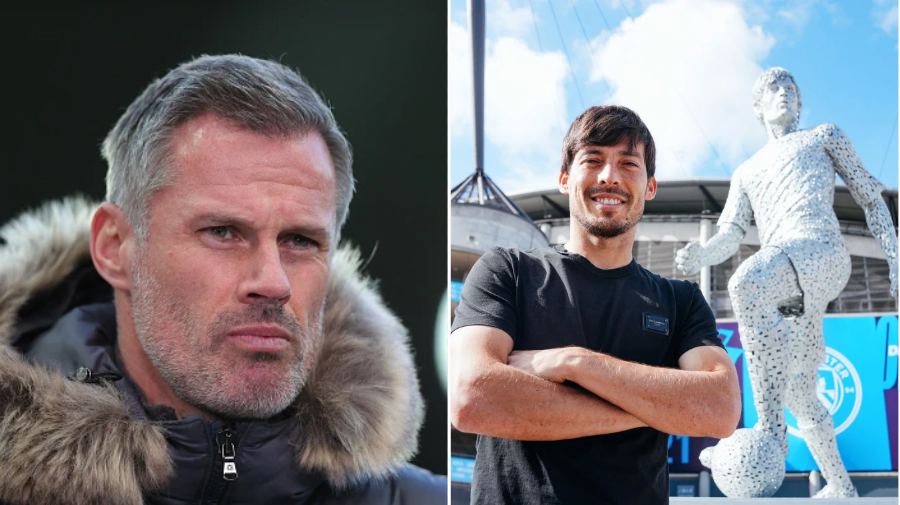 Jamie Carragher has revealed the bizarre reason he was blocked from interviewing David Silva by the Premier League champions amid the simmering tensions between Manchester City and Liverpool.

The hostilities between the two titans of English football boiled over last weekend after Jurgen Klopp’s side ended City’s unbeaten start to the new season following an incident packed 1-0 win at Anfield.

Klopp was sent off during the closing stages for remonstrating with the linesman, while counterpart Pep Guardiola allowed his emotions to get the better of him, geeing up the home crowd after seeing what he thought was the opening goal of the contest ruled out by VAR.

Following the game reports emerged of sinister Hillsborough chants being sung by City fans, while toilet doors were daubed in offensive graffiti with Liverpool condemning the actions of a minority of supporters in a strongly worded statement.

Klopp, meanwhile, has subsequently taken legal action after he was accused of xenophobia and whipping up tension between rival fans by pointing out that Liverpool, and the rest of world football, were unable to compete financially with state-owned football clubs like City, Newcastle United and Paris Saint-Germain.

Carragher, writing for the Daily Telegraph, cannot compute how City could have taken umbrage with Klopp’s assessment of the financial advantage they enjoy.

He wrote: ‘To equate what City and Paris Saint-Germain have done – and what Newcastle United intend to do – with what is possible for other clubs is an insult to everyone’s intelligence, no matter how much ‘net spend’ or salary figures are twisted. Three clubs stand apart because they are backed by sovereign wealth which means there is no prospect of their cash reserves running out.

‘City will always be in running when the next Haaland is on the market. If for some reason their signing of the Norwegian did not work, they would use their resources to sign another striker next summer, continuing to invest to protect their status. Long-term, the stakes are not as high for them when compared to the majority who know if they get it wrong it may take years to rebuild.

‘That is why clubs embarking on a slow and steady build – like Liverpool and Arsenal – are hailed as a more realistic and sustainable template for everyone else. Liverpool cannot afford to buy another £85 million striker next summer if the Darwin Nunez deal fails.’

Carragher also accused City of paranoia and revealed he was declined the opportunity to speak with Silva ahead of his departure from the club after a decade of lighting up the Premier League.

He added: ‘Since working in the media, I have experienced City’s paranoia.

‘Over the years I have used my platform on Sky Sports and in this column to show my respect for City managers and players. As recently as last week I wrote De Bruyne could be the Premier League’s greatest midfielder, and said Haaland terrifies defenders.

‘Prior to David Silva’s City departure I wrote how he was one of my favourite ever Premier League players. I wanted to interview Silva before he left English football, well aware of City’s belief that their rivals receive more favourable media coverage.

‘When told of my request, City’s response was they would grant no such interview to me because ‘I wear red pom poms’. Every ex-player in the media wants their team to win but no other club has reacted to me in this way.’