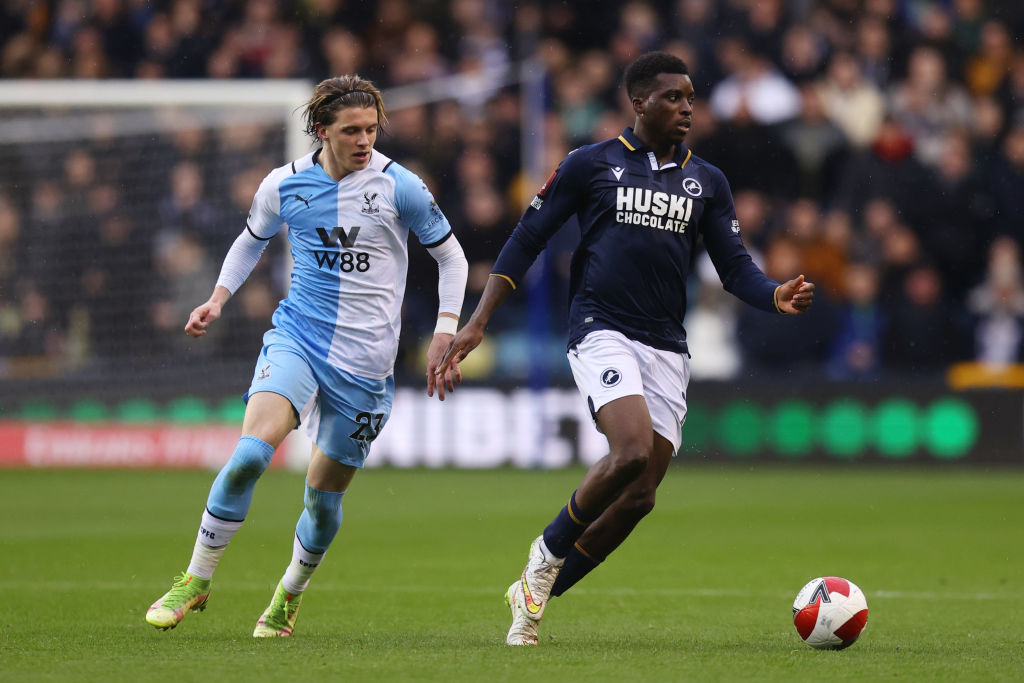 ITV were forced to apologise after their microphones picked up homophobic chanting from Millwall fans aimed at Crystal Palace midfielder Conor Gallagher during the sides’ FA Cup third-round clash.

A pair of second-half goals from Michael Olise and Jean-Philippe Mateta cancelled out Benik Afobe’s early opener to send Palace in the next round of the competition, but the tie was marred by the behaviour of some of Millwall’s home support at the Den.

Boos echoed around the stadium as Palace’s players took the knee prior to kick-off, with Millwall opting against the gesture, and goalscorer Olise had an object thrown at him while stepping up to take a corner shortly after Mateta’s winner.

Later on in the match, ITV commentator Clive Tyldesley apologised profusely after Chelsea loanee Gallagher – who provided the assist for Olise’s stunning 46th-minute equaliser – was the target of vile homophobic abuse.

The foul language was clearly audible on on ITV’s coverage of Saturday’s lunchtime kick-off, with homophobic chanting also marring a number of Premier League matches this season.

‘We’d like to apologise if our effects microphone picked up some obscene language there a moment or two ago,’ Tyldesley said.

‘Again, we must apologise for any foul language that has been picked up,’ Tyldesley later added after more chanting was heard.

Gallagher was the target of similar homophobic chanting during Palace’s 1-0 defeat at Elland Road in November and Leeds were quick to condemn the ‘unacceptable’ behaviour of those fans responsible at the time.

‘Overall the support from Leeds United supporters at last night’s game with Crystal Palace was magnificent,’ a Leeds statement said.

‘Once again the fans got behind the team and played a huge part in pushing the players on to get the late winner.

‘However, we are aware of a homophobic chant directed at a Crystal Palace player and we want to be very clear that this is unacceptable.

‘We will continue to work closely with Marching Out Together and all of our supporter groups to ensure that we do everything within our power to eradicate homophobia and any other form of discrimination from our football club.’

Homophobic chanting was also heard from the away end during Tottenham’s Carabao Cup clash with Chelsea at Stamford Bridge in the week, to which Spurs responded: ‘The club is extremely disappointed by homophobic chanting from sections of our support.

‘We work closely with our LGBTQ+ fan group Proud Lilywhites to create a welcoming and inclusive environment at our club and are proud to display the Progress Flag in our stadium on matchdays.

‘No one should suffer discrimination because of their sexual orientation and/or their gender identity and we urge supporters not to use this chant.’