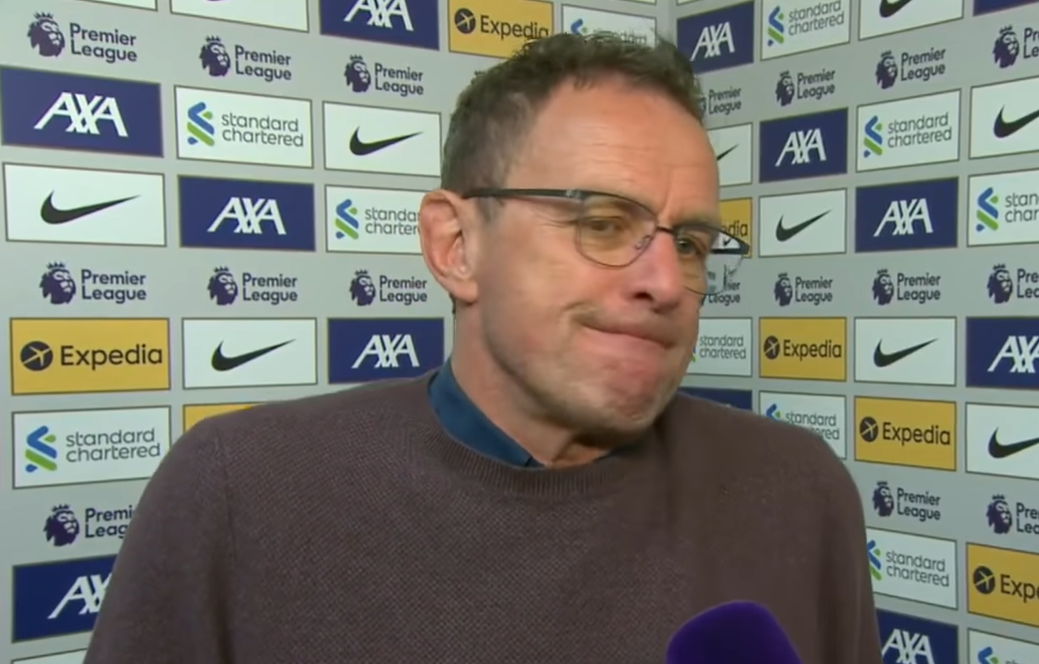 Manchester United boss Ralf Rangnick has criticised Victor Lindelof for playing a pass against Liverpool that he had ‘blacklisted’ during the team’s preparations for the trip to Anfield.

The Red Devils gave a woeful showing on Tuesday night and went behind after just five minutes en route to a 4-0 defeat, with Luis Diaz, Mohamed Salah and Sadio Mane all getting on the scoresheet.

United briefly offered a hint of a threat of getting back into the match after half-time, but the game was put to bed in the 68th-minute when Mane netted Liverpool’s third goal.

Rangnick was far from happy with the nature of that goal, with Lindelof having attempted to play a pass into the feet of youngster Anthony Elanga who had his back to goal.

Andy Robertson pounced on the pass, intercepting and driving forward, and just a few seconds later the ball was in the back of United’s net.

Rangnick says he spent the build-up to the match instructing the players on how to avoid that exact scenario, which plays into the pressing style Liverpool are so good at, and was at a loss to explain why Lindelof attempted such a pass.

Speaking to MUTV after the game, he said: ‘Had we scored a goal that might have changed the game but we didn’t. We had our moments in and around the box but couldn’t finish any of those moments.

‘And the third goal again was just a pressing invitation to play a 10- or 12-yard short pass into Anthony Elanga – it doesn’t make sense!

‘Everybody knows that Anthony is a player for [playing] a ball in behind their backline but not into his feet.

‘They were just waiting for that kind of ball, quite similar to the goal that we conceded at Everton, and six seconds later the ball was in our net.’

Reiterating his frustration at his post-match press conference, Rangnick said: ‘The way that we prepared, I have to say, the third goal was exactly the kind of ball that was on the blacklist of things that we shouldn’t do against Liverpool.

‘A 12-yard pass into Anthony Elanga – who is not a player for that kind of ball – they are just waiting for those kind of balls Liverpool and then we conceded the third one.’

Also highlighting Harry Maguire’s poor pass to Hannibal Mejbri just before Liverpool’s fourth, Rangnick added: ‘We played exactly the kind of ball before the third goal that we didn’t want to play, a 15-yard ball into their pressing zone, and with the fourth goal it was similar.’