Ansu Fati put Barcelona into the last-16 of the Spanish Cup, but only after Oriol Soldevila, a 21-year-old who spent two seasons with Birmingham City’s development squad scored a hat-trick against them to take the game into extra time.

The Alicante-based minnows CF Intercity play in Spain’s third tier and weren’t given a prayer against a Barcelona team replete with internationals but Soldevila had other ideas with three goals against a club he had played for as an under-18 rising star before moving to England.

Barcelona came into the game top of La Liga; Intercity are 16th in their third tier regional group and have only been existence for five years. None of that mattered as Xavi side floundered in defence and Soldevila played the game of his life. 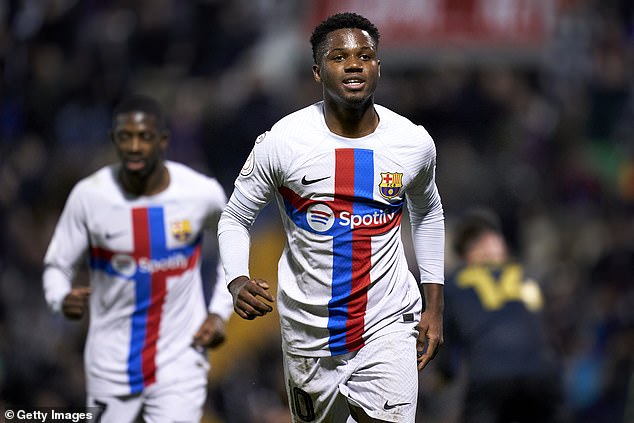 Things started well for Barcelona when after almost 100 days out with injury Ronald Araujo took just four minutes to mark his comeback with a goal.

Pablo Torre swung over a corner and the defender launched himself at it sending a header past Gaizka Campos just under the crossbar. Araujo was outstanding at both ends.

Intercity’s best chance came when Oriol Soldevila put Aaron Pinan through. He raced with the ball at his feet from the halfway line – his problem was that the Uruguayan was racing with him and he slid in to scoop the ball to safety just a yard from the goal line.

Barcelona were struggling to get the second goal with Ferran Torres most guilty of missing chances.

He dwelled too long on the ball inside the Intercity penalty box to waste Barca’s first chance of the second half and from that miss they almost scored through Aaron.

Barcelona were being roared on by the ‘home’ fans. Intercity only have around 1,000 season ticket holders.

Playing the game at nearby Hercules’ stadium gave them a massive payday but it also meant the stadium was full of Alicante based Barça supporters.

Those fans were stunned on 59 minutes when Martin Bellotti jumped above Araujo and Jules Kounde to head to the back post where Torres couldn’t prevent Barcelona-born Soldevila to score.

Xavi threw on Raphinha, Eric Garcia and Gavi for Pablo Torre, Torres and Araujo. They were changes planned before the goal but Xavi then sent Alejandro Balde and Ansu Fati to warm up. He sensed catastrophe – it would be Dembele who prevented it.

Gavi threaded the ball through and the France winger streaked clear, drew the keeper and clipped it over him to net his sixth of the season for Barcelona. 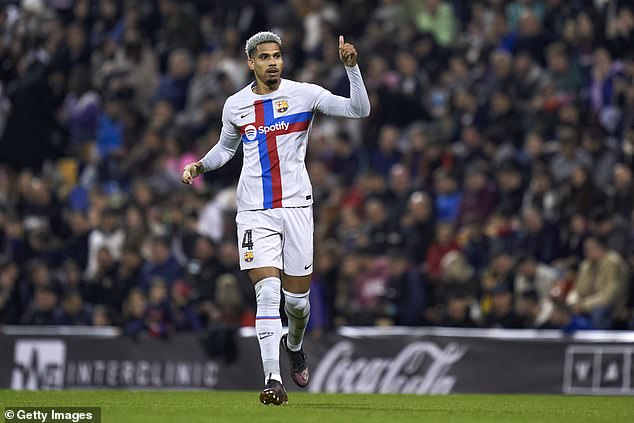 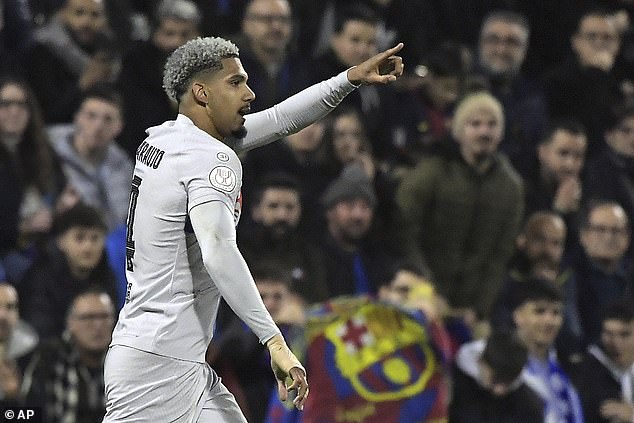 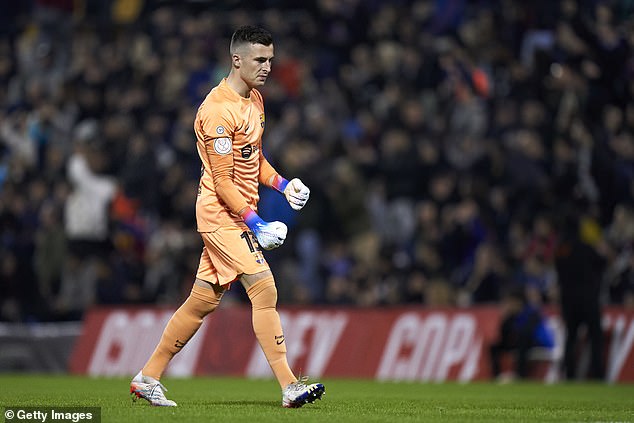 He is the player Xavi has always defended and he had got his boss out of a hole – only for them to take a few steps forward and fall through another one.

Cristo Romero whipped the ball in from the left and Soldevila was there again to get in front of Jordi Alba, who provided no more resistance than Torres for the first goal, to score and make it 2-2.

Alba made immediate amends with one of those crosses from the left that arrives gift-wrapped to the back post for anyone who has made the run to score. Raphinha was the recipient and he put Barça back in front at 3-2. 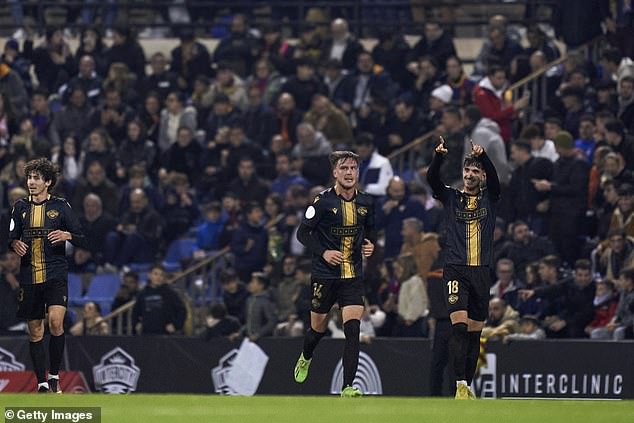 However, Oriol Soldevila (right) scored his first goal on the hour mark to draw Intercity level 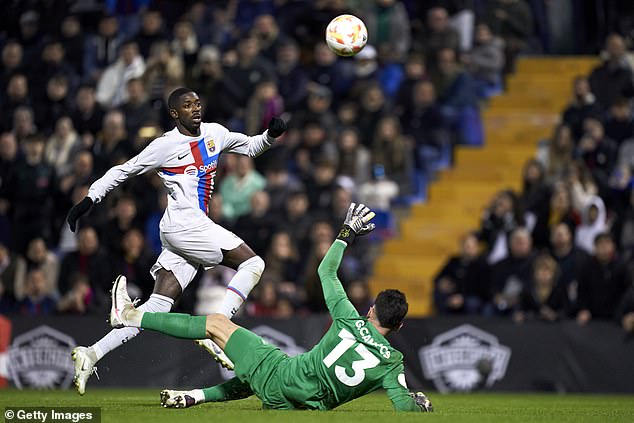 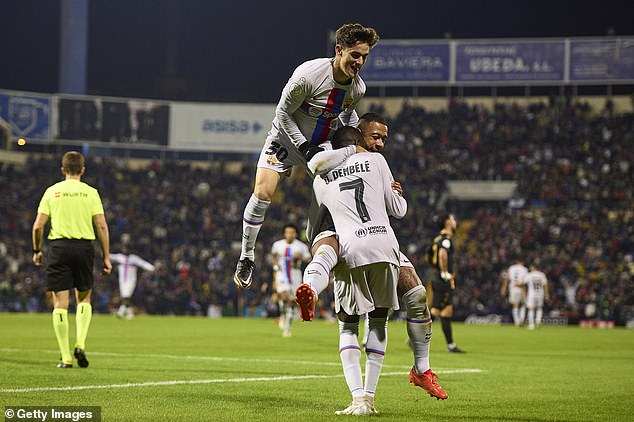 Fati was on now – he had played the ball out to Alba for the third goal – and he came close to making it four shooting into the side netting.

Intercity were not going quietly though and after a wall pass inside the area with Miguel Mari, the inspired Soldevila had his shot saved by Inaki Peña. He had been denied a hat-trick but not for long.

With Intercity’s next chance to scored, Christian Herrera pushed substitute Marcos Alonso off the ball and played it quickly through to Soldevila who this time beat Pena at his near post. 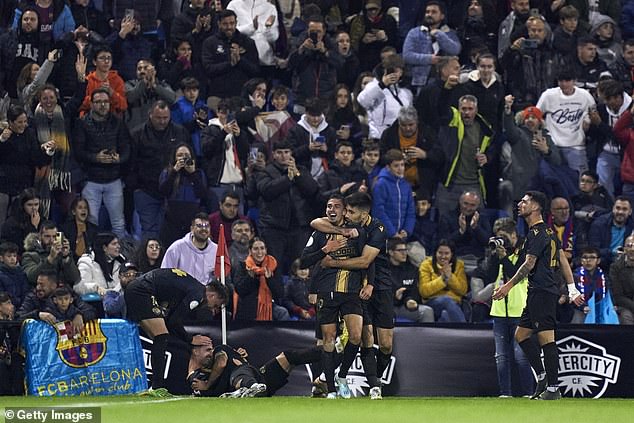 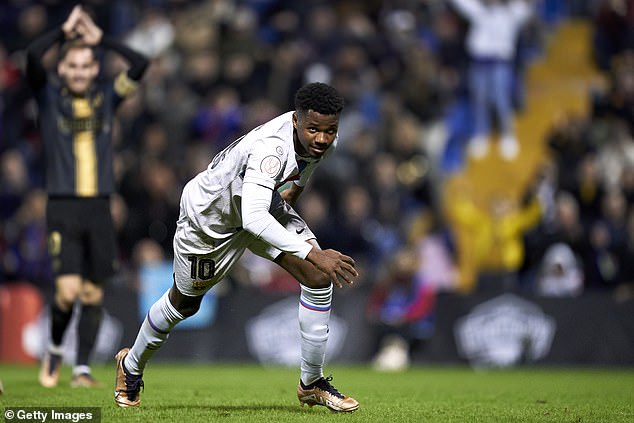 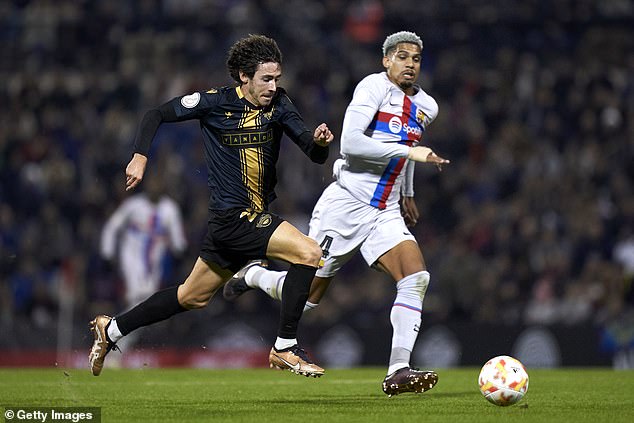 Intercity’s performance was impressive some of the spectators who had arrived with Barcelona scarves were now willing the minnows to pull-off the impossible.

In extra time Barcelona went ahead for the fourth time in the game when Raphinha’s cross from the right was hit first time by Fati. It took a deflection to help send it past Campos and this time Intercity stayed down, finally beaten.

Barca’s blushes had by no means been saved though – the defensive lapses will be pored over in the coming days. If they are repeated Xavi will end a season without a trophy once more.