IAN HERBERT: Why late bloomer Kieffer Moore makes a big difference to Wales… the 6ft 4in battering ram – known as ‘Zlatan’ – is a sheer physical presence and itching to smash England

It has to be said that some people in the USA did not take the result against Wales terribly well.

‘USA LOSES 1-1’ a New York Post back page headline proclaimed of the deadlock against Wales at the Al Rayyan Stadium, recalling the paper’s legendary front page after the same scoreline against England in 2010, which it described as a win and the ‘Greatest tie against the British since Bunker Hill’.

And then there was the post-match disgruntlement of a member of the US press corps, after Wales captain Gareth Bale’s appearance had lasted only a couple of minutes. 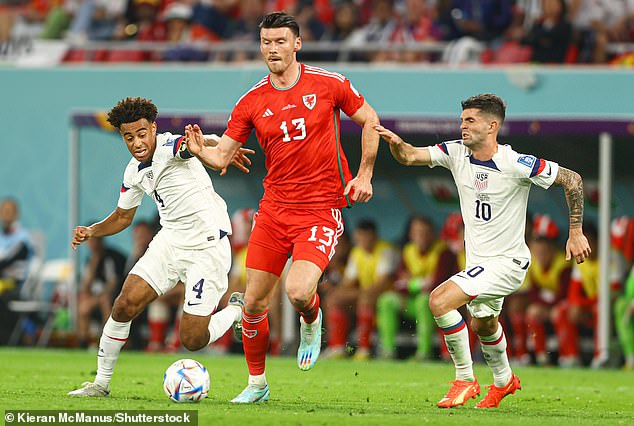 ‘Why should we bother covering you guys?’ the American shouted, as man of the match Bale left the room. The Wales FA’s head of PR, Ian Gwyn Hughes, gave this short shrift. Bale had been waiting to speak while the USA coach Gregg Berhalter held court, he said. Wales did not have all night.

That Bunker Hill battle, part of the War of Independence which secured America freedom from British colonisers, was not for the faint-hearted. It was the fight which saw the first use of the expression: ‘Don’t fire until you see the whites of their eyes.’

Precisely the kind of encounter which you imagine Kieffer Moore would have been up for.

Bournemouth striker Moore — or ‘Zlatan’ as they know him in Wales — is far more than the battering ram which some consider him to be. But his sheer physical presence, at 6ft 4in, was what manager Rob Page needed to introduce after a desperate first half against the USA. 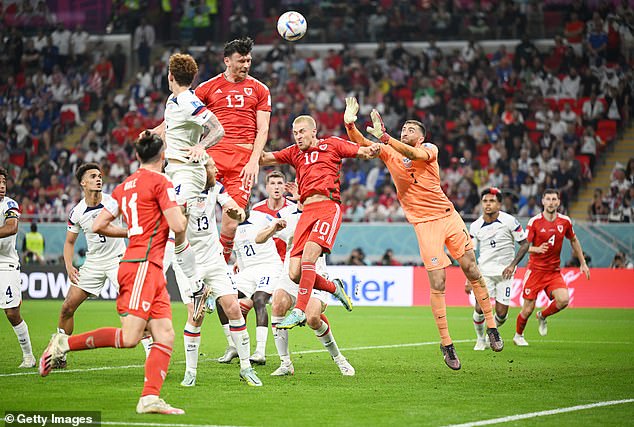 The 30-year-old, having replaced Dan James, provided a target for Wales to aim for as they started to play over the press of their younger, more athletic opponents. His hold-up play brought others into the game and pinned the USA back. It meant that Bale and Aaron Ramsey, strangers in the first half, were close enough on the field to interact and win the penalty which allowed Wales to fight another day. It was a ‘second-half swoon’ from the US, the Post said.

Bale does not do platitudes, so he was not being polite when he declared in the aftermath of the game that Moore had been his man of the match. ‘He came on and made a big difference. He gave us that physicality and it was a great performance,’ Bale said.

Harry Wilson, who struggled in the first half, made the same observation. ‘Kieffer gave us the platform to build,’ he said. You would have thought Page might have seen enough over the past few years to make the forward a certainty to start his side’s World Cup opener on Monday. Wales are nearly always a better side when he plays. 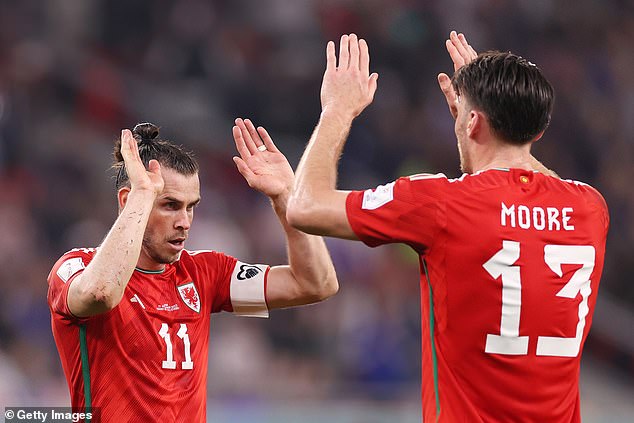 And here are the tallest players to appear at the WC…

The memory lingers of Moore, with head bandaged, dominating the Switzerland defence as Wales rescued a 1-1 draw in their opening game of last summer’s Euros. And of his pogo-jumping routine in the match against Italy in the last group stage match. Moore’s height was needed so badly that night that he was sent on under instructions to jump with his arms down, to prevent a second booking which would have kept him from the last-16 game. That was certainly a Bunker Hill.

The header Moore angled just over the bar in the second half against the USA was the closest he came to scoring on Monday but he also created the distraction which allowed Ben Davies to get in his strong header, which was tipped over.

The defensive component was less appreciated but something in his game that former Wales striker Ian Rush considers essential.

‘When you are playing up front by yourself you get battered by all the defenders and it is the people like Bale, Ramsey and James who get the rebounds,’ says Rush. ‘But he is also a proper defender.’

Moore has been around the houses. He left Yeovil Town for Viking Stavanger in Norway and was playing for Forest Green Rovers six years ago, before blooming late at Wigan Athletic and then Cardiff City.

He has monitored Zlatan Ibrahimovic closely because he shares the Swede’s wish to be seen as a player with nuanced football skills.

Moore said of Ibrahimovic before the World Cup: ‘In his early years, you would have probably looked at him and thought he is big and strong and a one-dimensional player. But he is so much more than that and is technically amazing. I aspire to that.’

Moore has his sights set on England. ‘I can’t wait to knock them out. It would be amazing,’ he said in that pre-tournament interview.

But Wales must first seize on this opportunity and secure an emphatic win over Iran on Friday, which would leave USA under pressure.

Chris Mepham, Moore’s Bournemouth team-mate, was in no doubt about the contribution he can make here. ‘I probably know him better than anyone, playing with him week in week out at club level,’ he said. ‘I know how much of a handful he can be. I wouldn’t like to come up against that.’