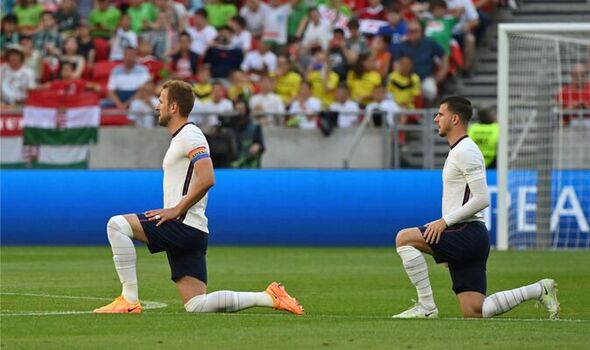 Hungary’s blackshirt racists were banned from the Puskas Arena so instead, it was the schoolchildren invited along in their place who let themselves down against England. The high-pitched booing which greeted the England players taking the knee before kick-off in Budapest on Sunday represented the dispiriting sound of innocence lost.

Maybe they were just copying the example of their elders but it was a depressing repeat of the ignorance which landed Hungary the behind-closed-doors sanction in the first place. If this is what they are being taught is the correct response to a gesture aimed at promoting equality, it is a sad situation.

At least there was no abuse of England’s black players – or Hungary’s Loic Nego – at the Nations League game but that was a pretty low bar to clear. The Hungarian FA’s sleight of hand in exploiting a loophole in the UEFA regulations following the punishment imposed for racist behaviour to half-fill their national stadium with children was well-intended.

Never has a behind-closed-doors match been so well attended; never has one been so noisy as the 30,000 children inside the Puskas Arena let rip with their red, white and green vuvuzelas. But in one moment what should have been an occasion that pointed to a more wholesome future for Hungarian football was soiled.

Football never stands alone from the society it exists in. Earlier in the day, Budapest had seen a far-right march protesting against the Hungarian government’s support for Ukraine. Gareth Southgate had expressed his surprise at the numbers allowed in ahead of the game but UEFA themselves had no issue with how Hungary chose to interpret it.

“This rule was introduced back in 2019 and has been applied to other matches in the past with similar sanctions relating to matches played behind closed doors. There is no restriction regarding the number of children present in the stadium,” said a UEFA spokesman. The punishment on Hungary was the absence of any gate receipts from the game with the tickets being distributed to the children – and 3,000 adult supervisors – free. That and the shame of the sanction.

“Please remember that in football there is no place for racism,” the stadium announcer had earnestly reminded everyone ahead of kick-off – in English as well as Hungarian which seemed a little pointless with no away fans in the ground.

England have their own version of this embarrassment to come on Saturday when they are required to stage a behind-closed-doors game against Italy at Molineux, a punishment imposed after the chaos at the Euros final. The current plan is to have 3,000 children present.

There is one thing the English kids could take on board from their Hungarian counterparts next weekend – how to respond to the opposition anthem. God Save The Queen was respected as it was played and applauded at the end.

If only everything else had gone so well.