A heavy police presence was the only navy blue on show as Melbourne Victory resumed play in the A-League Men’s competition on Monday night.

More than 30 officers were noticeable around the front of AAMI Park along with multiple vans and others placed in and around the venue as reigning champions Western United hosted the Victory. 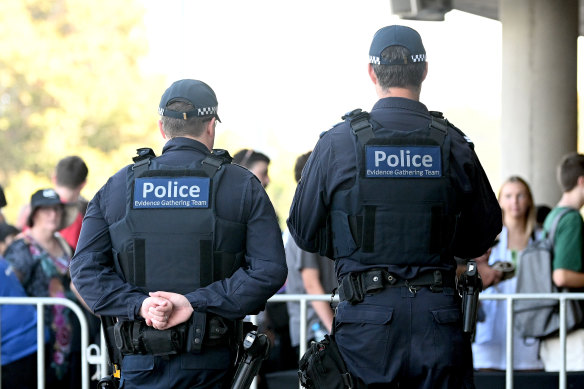 Normally, the front of the stadium would be draped in Victory’s navy blue but, instead, the blue and fluoro green of the state’s police force took its place as the club began a series of sanctions for the violent pitch invasion last round against Melbourne City.

Victory star Nani was surrounded by almost 20 police as he and defender Roderick Miranda walked to the players’ entry as officers otherwise patrolled along Olympic Boulevard.

One fan in Victory colours was spotted walking away from the stadium about 90 minutes before kickoff and one Victory scarf was seen on a fan’s bag but United were allowed to admit up to 1000 people on complimentary passes if they were on an approved Football Australia list. 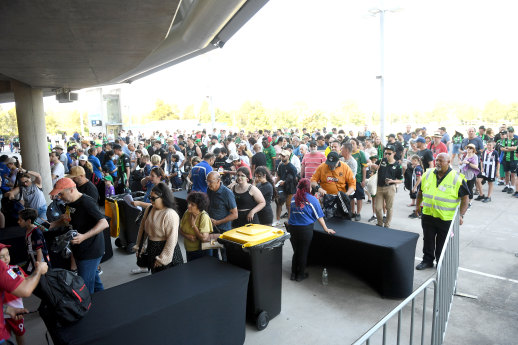 Fans queue to go through security at AAMI Park on Monday night.Credit:Getty Images

Some Victory fans on social media had reportedly threatened to buy three-game Western memberships in an attempt to attend the game, but the crowd was meant to only be Western members and supporters, along with ticket holders who purchased them before 1pm on Friday and 1000 or fewer complimentary pass holders.

If any Victory fans tried this tactic they were impossible to see amid fans who were coming from the Boxing Day Test and football fans in Western colours or other jerseys like Lionel Messi’s Paris Saint-Germain top or Cameroon’s World Cup jersey.

The FA asked all clubs during the week to actively encourage fans not to breach the bans or market tickets to desperate Victory fans.

In the stadium, the Victory’s active end was covered in a tarp and the first five rows of seats at both ends of the ground were blocked off and covered with a crowd of a few thousands fans scattered around the stadium as kick-off approached.

In other A-League Men’s news, Melbourne City coach Rado Vidosic admitted he couldn’t be certain whether goalkeeper Tom Glover had moved past the alleged assault during the pitch invasion by Melbourne Victory fans in the Melbourne derby.

Glover is expected to take his place in the side against Central Coast Mariners at AAMI Park on Tuesday night after he was concussed and suffered a cut to the head after a bucket of sand was allegedly thrown at him during the pitch invasion.

A 23-year-old Craigieburn man was charged by Victoria Police with violent disorder, discharge missile, intent to cause injury, recklessly cause injury, unlawful assault, entry to sporting competition space, disrupting a match, public nuisance and riotous behaviour for the incident.

“Tommy missed the first few training sessions with a concussion but he has trained the last two sessions and he is good to go,” Vidosic said on Monday.

“We are looking forward to the game, it has almost been 10 days between games.

“He had a lot of support from players and everyone around him here and he looks back to his normal self.

“He trained really well and we hope everything is fine with him but we will find out a little bit more tomorrow once he starts the game.”