‘It was an absolutely brilliant piece of skill and finish… he is a huge talent’: Brendan Rodgers delighted with Harvey Barnes as he rescues Leicester a point at Leeds

Anyone who dismissed Harvey Barnes as a one-cap wonder might have to think again.

It has been more than a year since the Leicester midfielder made his only England appearance after a knee injury ended any hope he had of gatecrashing Gareth Southgate’s squad for the Euros.

But here at Elland Road, Barnes proved he was back, and it is a sight which will have been welcomed by Southgate as much as it was by his Foxes boss Brendan Rodgers. 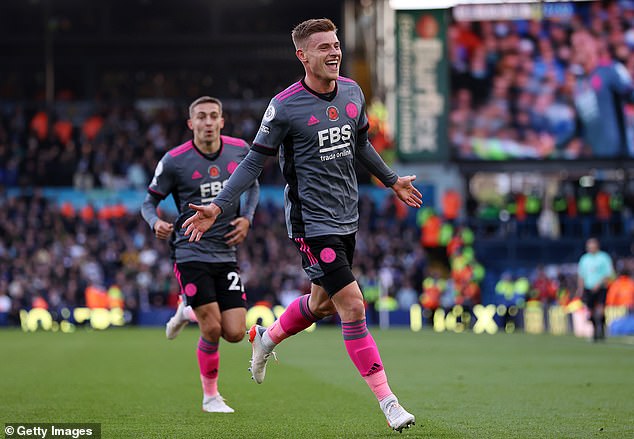 Barnes’ moment of magic came just 73 seconds after Leeds had taken the lead and it was three touches which demonstrated his terrific talent.

Straight from the restart, Jamie Vardy passed the ball back to Jonny Evans, whose long ball was flicked on by Boubakary Soumare into the path of Barnes to the left of the box.

Barnes took one touch to control and another to cut inside Diego Llorente before bending into the far top corner past Illan Meslier, who did not even bother to dive.

‘It was an absolutely brilliant piece of skill and finish,’ purred his manager Rodgers. ‘He is returning more to himself.

‘He is a huge talent. As the season goes on he will get better and better. He showed his top quality with that finish.’

This was certainly some statement from Barnes, who has had to fight his way back to fitness and form after he was forced to have a second operation on his knee in February.

He missed Thursday’s Europa League draw against Spartak Moscow through illness but returned to make Leeds’ defenders dizzy on Sunday. 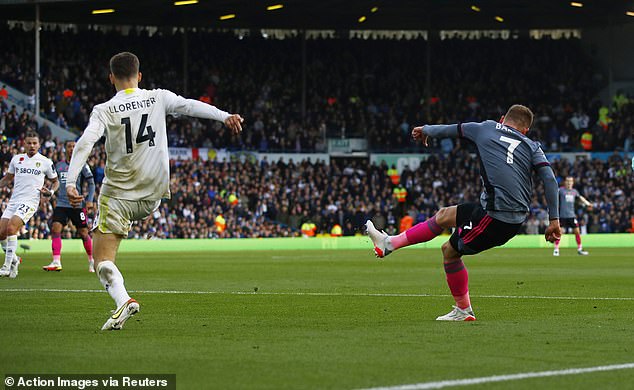 If Barnes’ strike was the champagne moment, though, the star of the show was Leeds’ boy from Brazil who continuously brought the Elland Road crowd to their feet.

Raphinha’s 26th-minute free-kick was his fifth goal of the season. Leeds have only scored another six in the Premier League and it is worrying to think where they would be without him, especially with Patrick Bamford still out injured.

‘There is nothing new to say,’ admitted Bielsa, such is how he has come to expect such displays from his main man. ‘The important thing is he is maintaining his contributions regularly.

‘He is capable of doing the things he is doing, in a higher or less way but in every game. He’s influencing and he impacts with his actions in the game.’

Bielsa reserved his real praise for midfielder Adam Forshaw, who was superb on his first league start since August 2019 after suffering from a chronic hip problem.

‘It’s a prize for his perseverance,’ said the Leeds boss. ‘He spent two years without playing, he never gave up.

‘It’s very difficult to come back and play at this level after two years having not done so. I had serious doubts that he could achieve what he just achieved.

Bielsa’s glowing words for Forshaw, though, could not disguise his disappointment at not winning a game which was clearly there for the taking.

Leeds are only three points above the bottom three, with just two Premier League wins this season, and their dominance here should have resulted in more than one goal.

Kasper Schmeichel was forced into action twice in the opening five minutes — clawing away Jack Harrison’s deflected curling shot and then, from the resulting corner, keeping out Kalvin Phillips’ point-blank header.

Leeds could then have had a penalty when Raphinha went down after a tangle with Ricardo Pereira, only for referee Darren England to blow the other way.

Still, it would not be long before Raphinha got his way. He won and took a free-kick from outside the right edge of the box, with his low, inswinging effort evading everyone as it nestled inside Schmeichel’s right post.

Leeds’ joy was shortlived thanks to Barnes’ brilliance but they should have retaken the lead in the second half.

From a Raphinha corner, Phillips flicked the ball on to Harrison, who somehow managed to clear the bar from two yards with his thigh.

Roared on by the passionate Elland Road crowd, Leeds kept pressing. Dan James bent one just wide and then Rodrigo went even closer, volleying into the side netting after Stuart Dallas picked him out at the back post.

Given their dominance of the second half, Leeds were left stunned after 67 minutes when Ademola Lookman tapped in at the back post after Vardy flicked on Tielemans’ corner.

But the hosts were reprieved when VAR showed Lookman was just offside. Bielsa said the match was ‘beautiful’ but it was so nearly an ugly ending for his side.