Winner of two English league titles with Manchester City, Joe Hart will take nothing for granted.

Yet the superb save the former England goalkeeper produced to deny Scott Arfield a Rangers winner felt like a title-winning moment for Celtic.

The mathematics say ‘not yet’. Six points and 19 goals clear with three games to go, victory over Hearts at home next Saturday would effectively win one of the unlikeliest titles in Parkhead history. 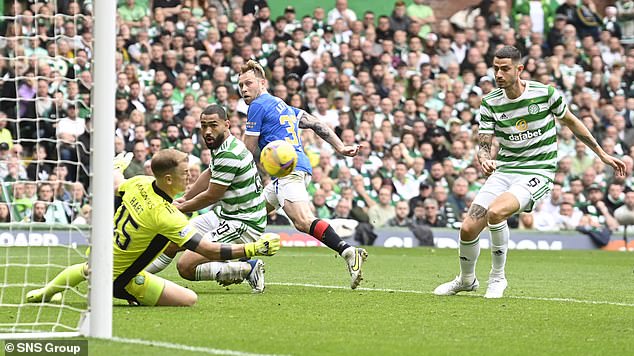 Fail to claim the full three points there and victory over Dundee United or Motherwell in their final games would have much the same effect. How comfortable the whole business would have felt had Fashion Sakala or Arfield beaten Hart in the final stages on Sunday harder to gauge.

From the minute substitute Scott Wright beat Carl Starfelt to cut the ball into Arfield’s path, a Rangers winner looked certain. At big moments big keepers win big points with big saves and, for Celtic, Sunday’s was bigger than most.

‘Ah, look, it is mayhem out there,’ said the keeper modestly. ‘I love playing football, love being in goal and sometimes you do things that you ideally don’t want to do, that you know you are better than.

‘And sometimes you do things where your body and your instincts take over, and I don’t know actually what happened, I just know it stayed out. 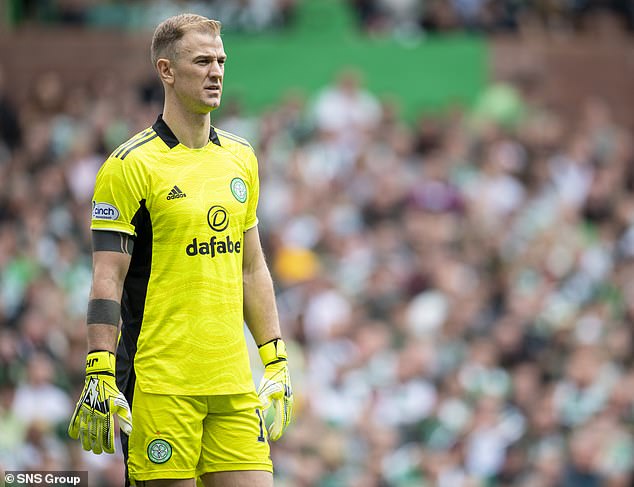 ‘You know, they were fighting for their lives out there, it was more important they won than we won. I was well aware with, however many minutes to go, I felt like we were going to get chances and they were probably going to get more… I think they hit the post after that.

‘So look, tough game, but great game, really good game to be involved in.’

A Rangers team with nothing to lose will feel they should have placed the seed of doubt in Celtic minds. Celtic found it equally hard to shake the feeling that they should have put the game to bed by scoring a second. A point apiece felt fair in the end.

‘Two good teams, two contrasting styles,’ said Hart. ‘Obviously we play to win. We are in a good, strong position and we will take the draw and move into next week. Good game.’

Asked if the title is now in the bag, the old boy saw the trap being set.

‘Look you are never going to get me to sit here and say that, but I think we’ve worked very hard to be in this position,’ said Hart.

‘We’ve come through a lot and we are pleased with where we are and we’ve got a job to do. And that continues. 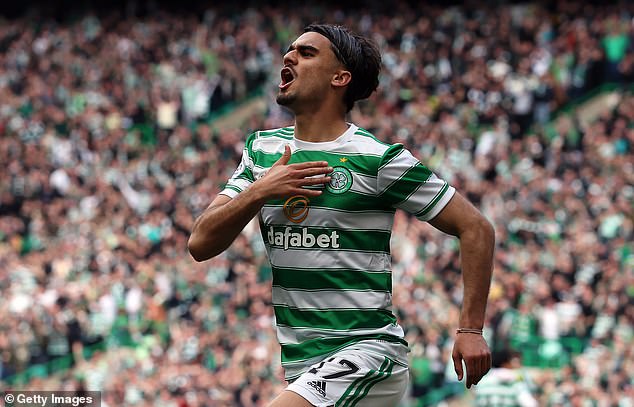 ‘I felt like we dominated but they are a hard team to put away. They are resilient and they are dangerous on the counter-attack, and I think with our aggressive style of play, if we are not two or three goals ahead, people have always got a chance.

‘But we stick by those foundations, stick by that way of playing football. It has won us more than it has drawn us games. It is is what is, and we have another three big ones coming up.’

Celtic’s failure to score a second — Kyogo Furuhashi and Daizen Maeda had big chances — echoed the recent extra-time defeat to their bitter rivals at Hampden in the Scottish Cup semi-final. In an edgy end to the game, when Parkhead fell into a state of nervous paralysis, it almost cost them once more.

‘It can happen,’ conceded Hart. ‘They are a good team, champions last year. Semi-finalist in a top European competition, we are playing against proper opposition here. And we worked hard to make those chances.

‘I know we didn’t take them but on another day we could have been more comfortable. But we weren’t, ultimately. Yeah, tight game, tight game.’

Had anyone offered Celtic this scenario after six league games they’d have taken it. Beaten by Hearts, Rangers and Livingston, the outlook for the title looked bleak. At New Year they sat six points behind a Rangers side flying in the league. A team assembled in haste over two transfer windows by an unheralded manager, winning the title will feel like quite the achievement. Even if Hart won’t go there yet. 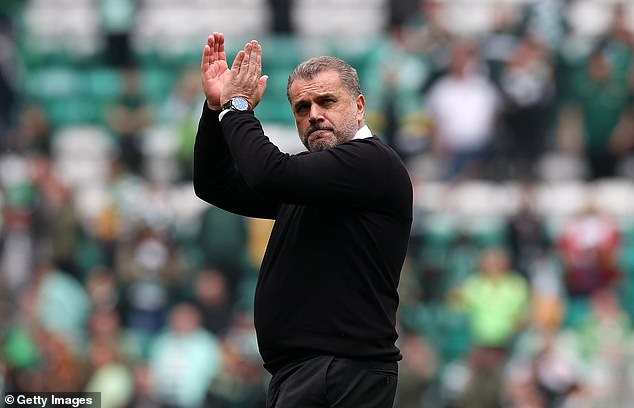 ‘I didn’t look too far ahead,’ he insisted. ‘Never have, never will. Whatever I’ve got left in this footballing earth, I just live in the moment.

‘We keep trying to play, with a lot of belief and great stewardship from the manager and staff keeping everyone calm. And superb support. Superb support.

‘We didn’t win away from home for the first three games and they were still there right behind us. They got us going in the league and were right behind us today. You can’t ask for more. So it is down to us to perform. This league is not set up for us to win it.

‘There is opposition out there, there are other teams trying to do it. Rangers mathematically are still in this fight. They are never going to lie down. This fixture wouldn’t allow them to lie down and that is why it is such a great fixture to be involved in.’

As Sunday’s game showed, crossing the finishing line is osften the hardest part.

A seasoned, experienced veteran, Hart’s contribution will be critical in the coming days and weeks.