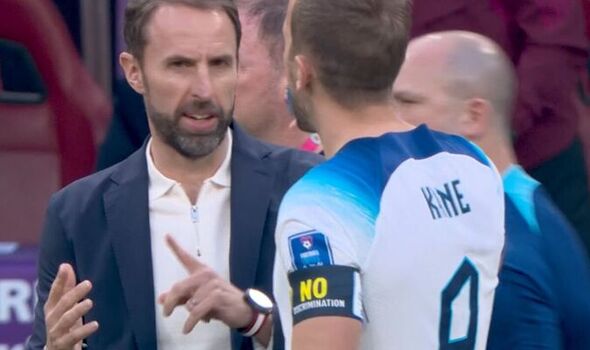 England captain Harry Kane appeared with a black armband that reads “No discrimination” in England’s opening game against Iran in Group B. It came after a plan for the captain to wear an armband reading ‘One Love’ was rejected.

The build-up to the match has been somewhat overshadowed by the situation regarding the OneLove captain’s armband, which was initially set to be worn by Kane before the FA backtracked on their plans despite previously insisting that it would go ahead regardless of FIFA’s stance on the matter.

An official FA statement read: “FIFA has been very clear that it will impose sporting sanctions if our captains wear the armbands on the field of play.

“As national federations, we can’t put our players in a position where they could face sporting sanctions including bookings, so we have asked the captains not to attempt to wear the armbands in FIFA World Cup games.

“We were prepared to pay fines that would normally apply to breaches of kit regulations and had a strong commitment to wearing the armband. However, we cannot put our players in the situation where they might be booked or even forced to leave the field of play.”

With fears there would be sanctions on players wearing anti-discrimination armbands during the World Cup, LGBT groups blasted Fifa over giving a “platform to hatred”.

LGBT football groups and politicians hit out at the governing body, with a campaigner saying teams had been “bullied” into not showing support for social causes.

A joint statement by Three Lions Pride and The Rainbow Wall, said: “In seeking to censor European FAs and players by forcing them to abandon using the ‘OneLove’ Armband aimed at tackling all forms of discrimination, Fifa are guilty of crushing the basic human rights to freedom of speech and of expression that every single one of us should have without question.

“In doing so, Fifa are guilty of silencing anti-discrimination work within the game and of giving a platform to hatred.

“This abuse of power by those who have chosen to remain silent for so long is a gross betrayal of trust and cannot be allowed to stand. We have no faith in Fifa, no trust in this World Cup.”

It was feared Three Lions skipper Harry Kane and Gareth Bale, of Wales, could be booked for wearing the rainbow-coloured One Love armband, because it is not a Fifa-approved piece of kit.

Fifa has issued its own armbands to be worn by the 32 competing nations instead.

LGBT rights campaigner Peter Tatchell said: “The OneLove armband was the tiniest of gestures. It did not even specifically mention LGBT+ people.

“It was a weak campaign but even that was too much for Fifa, who have bullied the England team to not wear it.

“Two days ago Fifa’s president spoke of inclusivity but this ruling shows his true colours.

“I urge the team captains at their post-match press conferences to spend just 30 seconds to speak out for the rights of women, LGBTs and migrant workers. That would have a huge impact, reaching a global audience of hundreds of millions of people.

“Fifa have crushed the OneLove campaign with the threat of yellow cards. It’s time to show Fifa and Qatar the red card.”

Anti-discrimination campaign group Kick It Out said players “should not have to bear the burden of Fifa’s mistakes” in not addressing the concerns of human rights groups and the LGBTQ+ community in the run-up to the tournament.

“The England & Wales players have my support,” she said on Twitter.

“The #OneLove armband promotes diversity & inclusion, which are values we will always stand up for.

“It is disappointing that our players are put in a position where they face being punished for supporting equal human rights.”

The Prime Minister’s official spokesman said: “We share the FA’s frustration with Fifa’s decision on this which puts players in a very difficult position.

“It is, ultimately, a decision for the FA.

“On LGBT rights more broadly, clearly Qatar’s policies are not those of the UK Government and not ones we would endorse.”