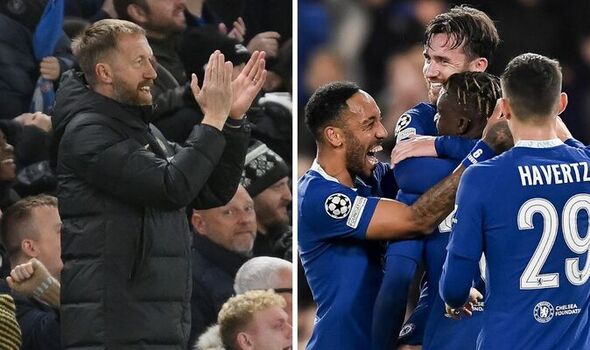 You will struggle to find a bigger smile inside Stamford Bridge than Graham Potter’s beaming grin when Denis Zakaria marked his Chelsea debut with a well-taken goal on Wednesday night as the Blues edged Dinamo Zagreb 2-1 in their final Champions League group match. The former Brighton head coach has been true to his word when hinting that the Swiss international would eventually get his opportunity to shine, despite a gruelling wait for his first outing in his new colours following his deadline day loan switch from Juventus.

Zakaria was initially signed by former boss Thomas Tuchel but failed to feature under the German’s tutelage before Todd Boehly ruthlessly wielded the axe following the shock 1-0 defeat to Dinamo in Croatia in September.

Chelsea are currently stacked with options in midfield following Conor Gallagher’s return to the club from a promising loan spell with Crystal Palace but various injuries have created a small opening for Zakaria ahead of the mid-season break for the World Cup in Qatar.

Potter has been full of praise for the player’s attitude and commitment on the training pitch at Cobham and finally freed Zakaria from his shackles for Chelsea’s final match in Group E before European competition takes a backseat until February.

The 25-year-old’s performance was full of energy and enthusiasm as he put out fires all over the pitch before netting Chelsea’s second goal of the evening. His goal was dispatched with confidence despite the ball bumbling over the line and the first-half strike was met with a heartwarming celebration from his manager.

Potter raised his hands above his head and applauded the goal while smiling uncontrollably. It was clear this was a moment that meant more than simply Chelsea taking the lead on the night.

Prior to the contest, the 47-year-old had conceded that he’d found it tough continually overlooking Zakaria, citing the difficult conversations he has shared with the player, who has been itching for an opportunity to impress.

“He has been really good,” Potter told reporters on Tuesday. “He’s trained well and has been supporting his team-mates. He’s disappointed not to play like anybody is but up until the weekend the results have been positive and with the performances.

“We’re trying to take steps. He’s in the frame for tomorrow. He is in the squad. He is available for selection so we will wait and see.”

Potter was also full of praise for his first outing in Chelsea colours, stating he channelled his frustration into positive energy on the pitch on a wet and windy night at Stamford Bridge.

“He’s been, as you can imagine, frustrated and disappointed when he doesn’t play. That’s the life of a player but he’s handled himself really well,” Potter said.

“He’s kept himself fit, he’s trained really hard, supported the team and his teammates in a really good way. When you do that, you give yourself a chance to perform when your opportunity comes. So credit to him. Everyone was so happy for him and it was a great story for the whole group I think.”

Zakaria’s first Chelsea appearance effectively confirms he will be staying with the club until the end of the campaign, having now played for both the Blues and Juventus in official matches this season.

Initially, there was some lingering speculation that his loan spell could be cut short in January but with Juventus seemingly unwilling to recall the player – he will now remain in west London where he will seek to force his way into the starting XI.

The Switzerland international conceded he’s had a tough time trying to earn minutes but now he is optimistic his eye-catching performance can provide a platform to sparkle for the Blues from here on in.

He told BT Sport: “[It’s been] Very, very difficult I have to say. I like to play and always want to play. When you have to see your team-mates from the bench it is not easy but I was always behind the team and was waiting for my chance. Today it came and I took my chance.”

When asked if he thinks he’s done enough to warrant more chances, he said: “I hope so but I think that is a question you will have to ask the coach!”

It’s clear Potter is the kind of manager that would like to keep all of his players happy but Chelsea’s strength in depth in midfield has created huge competition for places in the centre of the park.

However, on the basis of Zakaria’s performance, it is hard to envisage a situation where a coach of Potter’s imagination cannot find a purpose for the Juventus loanee, who brings different qualities to the table when compared with Chelsea’s other midfielders.