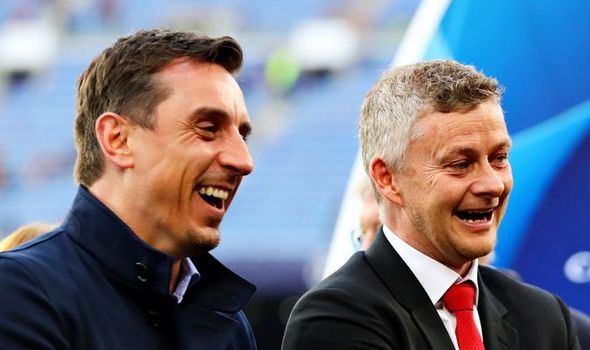 Manchester United icon Gary Neville has been proved correct as Ole Gunnar Solskjaer named the team he hopes will keep him his job against Tottenham this evening. The Red Devils boss has made a couple of key changes as he desperately scrambles to improve his side’s form after two disastrous defeats.

United were embarrassingly smashed 5-0 by fierce rivals Liverpool last weekend. Solskjaer’s side trailed by four at half-time as supporters streamed out of Old Trafford.

That result came a week after the 20-times top-flight champions were beaten 4-2 at Leicester City.

There have been just two wins for United in their last seven matches. Both of those successes came in the Champions League, in which they are on course to qualify for the knockout rounds.

Solskjaer will surely not be given much longer to improve results despite being handed the vote of confidence after the Liverpool defeat.

He has now named his team to face Spurs in a move which has proved former United captain Neville correct.

Responding to a fan asking how United will fare against Spurs, Neville tweeted: “Haven’t a clue!

“Players looked vulnerable last week and it depends how fragile they are or whether they have recovered.

“Think he will go 5 at the back and hopefully stop shipping goals! Also Cavani up top.”

And Solskjaer has done exactly what Neville predicted. It appears that United will start with a back five and with Cavani leading the forward line alongside Cristiano Ronaldo.

Summer signing Raphael Varane has been brought into the team after missing the last few matches with a groin injury. The Frenchman will start alongside Harry Maguire and Victory Lindelof.

Neville is one of the pundits who believes Solskjaer, a friend and former team-mate, should be given time to turn the club’s fortunes around.

The 46-year-old has faced criticism for refusing to call for the head coach’s dismissal, but has insisted that he has never called for any previous manager to be sacked.

However, he scathed about the performance against and warned Solskjaer that he will be lambasted from many angles.

“The pressure after this game is going to be intolerable in some quarters.

“The board have made everyone aware that they are steadfast in their support of the manager and that he stays.

“Results like this undermine that, there’s no doubt. This is sobering.

“Manchester United need to change. I believe Ole Gunnar Solskjaer is going to get the opportunity to change. But there is going to be pressure from every source.”

For the latest news and breaking news visit: /sport/football