Gary Neville has revealed he has been “found innocent by German law” and cleared of wrongdoing by Twitter after a post encouraging Frenkie de Jong to seek legal action against Barcelona was complained about by users. The Manchester United legend advised De Jong to report the cash-strapped Catalan club to authorities for their conduct as they have spent lavishly in the transfer market despite owing the Dutchman a reported £14.4million in deferred wages.

Given the La Liga giants’ financial turmoil, De Jong is said to have been issued an ultimatum this summer: join United or take a significant pay cut in order to stay at the Nou Camp. However, matters are complicated by the fact Barcelona owe the 25-year-old a substantial amount in postponed payments.

With the Blaugrana keen to find a resolution by either cashing in on De Jong or renegotiating the terms of his contract, ex-United right-back Neville demanded the midfielder take a stand against his employers and take legal action – especially given the Spanish side have splashed out over £90m on Raphinha and Robert Lewandowski already this summer, despite denying De Jong his full wages. Neville tweeted: “De Jong should consider legal action v Barcelona and all players should be behind him!

“A club spending fortunes on new players whilst not paying the ones they have under contract their full money is immoral and a breach. [World players’ union)] FIFPRO should be all over bullying like this and stop it.” 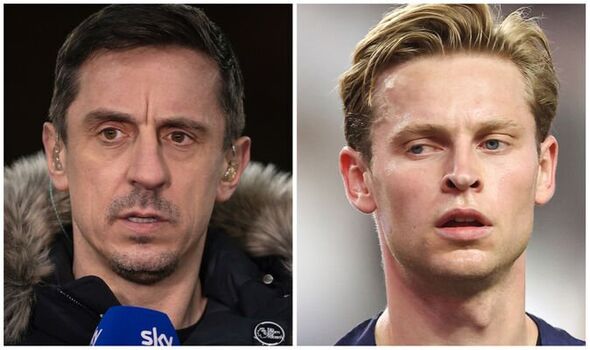 Neville himself then came in for some heavy criticism as a result of the tweet and revealed on Tuesday that his post had even been investigated by Twitter following complaints. The ex-Red Devil issued an update, saying: “I’ve been found innocent thankfully in a German Court of Law! Those Barca fans are sensitive,” followed by a laughing face emoji.

Neville’s tweet was accompanied by a screenshot of a direct message from Twitter which read: “Hello. Twitter is required by German law to provide notice to users who are reported by people from Germany via the Network Enforcement Act reporting flow.”

The message went on to clarify that a complaint had been received regarding Neville’s initial tweet, before continuing: “We have investigated the reported content and have found that it is not subject to remove under the Twitter Rules or German law. Sincerely, Twitter.” 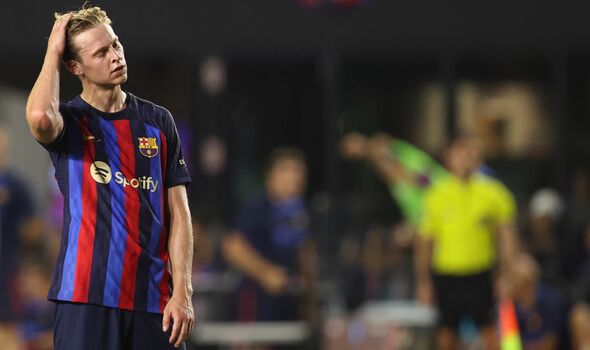 Neville was slammed by former Barcelona midfielder Marc Crosas for the post, with the Sky Sports pundit accused of not knowing what he was talking about. Crosas, who featured four times for Barca and played for them in the Champions League, said in response: “You have no idea what you [are] talking about.

“Barca spending fortunes on new players has nothing to do with salaries and salary cap. He has the right to leave, stay with the same contract, reduce it, or say NO to Man Utd. Maybe that’s what really hurts you and not Barca’s immorality.”

In a further tweet, Crosas added: “Nobody is ‘refusing to pay’. Barca is trying to renegotiate his contract the same way they did with Pique, Busquets, Ter Stegen, Jordi Alba, Sergi Roberto… Nobody complained at the time.”