The Socceroos’ long search for a naming rights sponsor is over, thanks to a record-breaking three-year deal with fast-food giant Subway which continues Football Australia’s rapid post-pandemic financial recovery.

Australia’s senior men’s team has not had a major corporate backer since their previous contract with Caltex expired at the end of 2019 – and that arrangement came after a nearly four-year stint without one, stretching back to 2013 when Qantas ended its decade-long stint as naming rights sponsor.

But Subway has come to the party just in time for the Socceroos’ fifth consecutive World Cup campaign – and their centenary celebrations on Thursday night in Brisbane when Graham Arnold’s side will face New Zealand, Australia’s opponents in their first ‘A’ international fixture 100 years ago. The team will now be known as the ‘Subway Socceroos’.

According to industry sources, the sponsorship is worth just under $12 million in total, making it the largest ever national-team deal in Australian football history, even outstripping the Matildas’ lucrative contract with CommBank signed last year.

“Subway joins us at a time of unprecedented interest and growth in Australian football,” said FA chief executive James Johnson, who recently extended his tenure with the federation until the end of 2024. 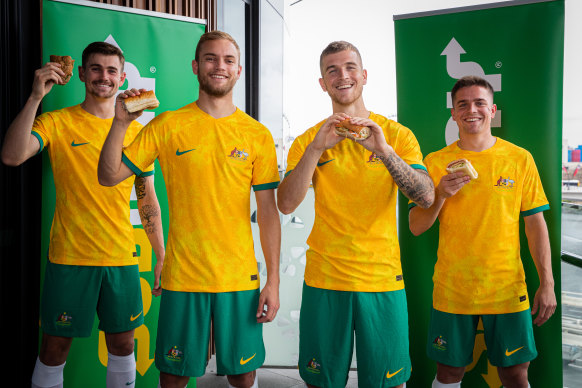 “The team at Football Australia has worked tirelessly to strategically position our iconic national teams in an increasingly competitive market and this record-breaking partnership, which follows a series of other commercial announcements over the past two years, demonstrates how deeply the Subway Socceroos and CommBank Matildas resonate with the Australian public.”

A few weeks into his tenure as David Gallop’s successor at FA, Johnson had to lay off 70 per cent of the federation’s workforce due to the severe impact of COVID-19, setting back plays to replace an exodus of sponsors that severed ties with the sport following Steven Lowy’s deposition as chairman.

Since then, FA has tied up naming rights deals for Australia’s men’s and women’s national teams, secured a new broadcast partner in Network 10, and returned participation numbers to pre-pandemic levels, as well as signing up a host of new sponsors, including Spanish automotive brand Cupra.

The organisation is now on track to increase FA’s revenues for the 2023 financial year to $100 million, in comparison to the approximately $85 million it banked per annum prior to COVID and the unbundling of the A-Leagues, which have since been spun off into a separate commercial entity controlled by the clubs.

The extra money in FA’s coffers has enabled the on-pitch return of all senior and junior national teams, many of which have been dormant over the last two years due to travel restrictions. It also shores up FA’s financial position as it looks to create a new national second division for men, which is on track to launch in 2024.