Doha: Emmanuel Macron just can’t seem to let the AUKUS agreement go. The French president continues to insist the federal government’s decision to turn its back on an existing $90 billion submarine deal for nuclear-powered vessels from the United Kingdom and United States “will not deliver” for Australia.

But as far as the Socceroos are concerned, France is fretting about the wrong subs – the kind that come off the bench, not the ones that go in the water. 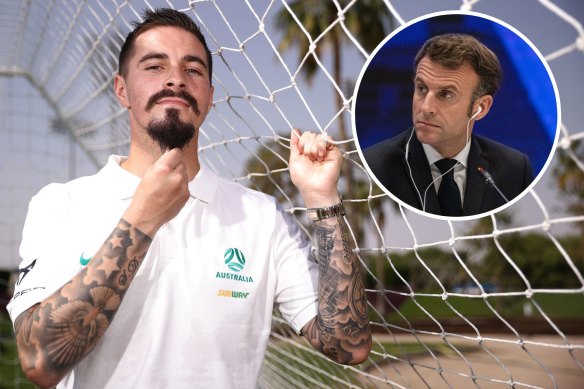 As Wednesday’s (AEDT) showdown between the two nations draws nearer, the Australian team is drawing confidence from the depth of talent in Graham Arnold’s 26-man squad, and the number of players within it who have the capacity to turn a match on its head.

In one of the few positive legacies of the pandemic, this is the first World Cup where teams will be able to use five substitutes instead of the traditional three – a change which enables coaches to inject more fresh legs into second halves, and gives greater scope for younger players to impress their qualities on matches.

“If you rely on 11, the game’s done and dusted, so we need an impact off the bench from all our players – and we’ve got game-changers.”

Maclaren is one of them, entering the fray in the 72nd minute of June’s preliminary play-off against the UAE under instruction from Arnold to “change the game”. He was ultimately involved in the play that set up the decisive goal scored by Ajdin Hrustic. 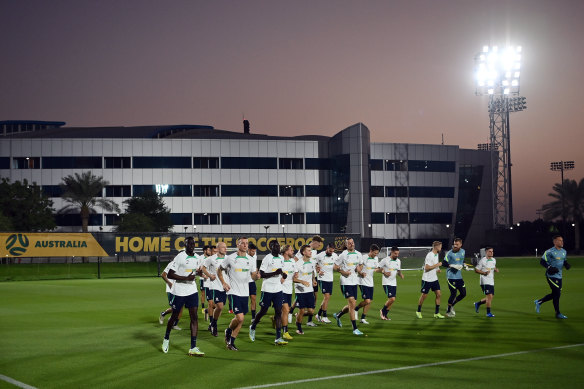 The Socceroos train at their lavish Aspire Academy base.Credit:Getty

In the subsequent match against Peru, where the Socceroos confirmed their spot in Qatar, four players who came off the bench helped win them the shootout – Maclaren, Craig Goodwin and Awer Mabil, who all scored penalties, and goalkeeper Andrew Redmayne, who wrote his name into national sporting folklore with his ‘Grey Wiggle’ routine.

While most of Arnold’s likely starting XI against France at the Al Janoub Stadium will pick itself – particularly since injured players like Hrustic and Martin Boyle are approaching full fitness again, having completed gruelling individual training sessions at the Aspire Academy on Friday evening as the rest of the squad enjoyed a day off – the ones left out will have ability to influence the action when called upon.

They don’t think they have Arnold’s backing. They know.

The obvious one is Garang Kuol, who has earned a contract in the English Premier League with Newcastle United off the back of his scintillating form as a super-sub in the A-League, making a habit of scaring defences into submission. And whichever of Australia’s three strikers – Maclaren, Mitch Duke and Jason Cummings, who all have markedly different attributes – gets the initial nod, the others will be waiting in the wings, ready to go. 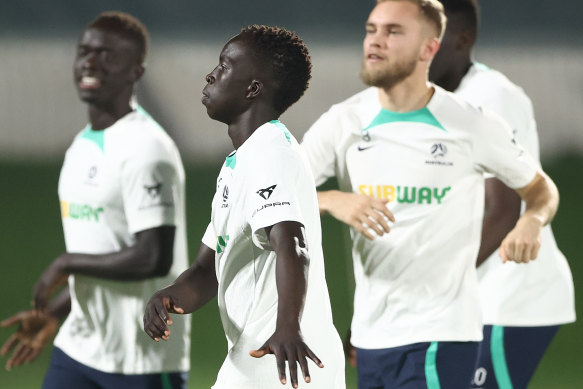 Rising Socceroos star Garang Kuol has built his career so far off the back of his role as a super-sub in the A-League.Credit:Getty

It’s a welcome change from the last World Cup, where then-coach Bert van Marwijk deployed the same starting team in all three matches at Russia 2018, and only four different substitutes, which meant nine members of Australia’s squad – Maclaren among them – didn’t see a single minute of game time.

“[Arnold has] put trust in all 26 players. I felt like maybe last time, maybe Bert didn’t trust everyone, me included,” he said.

“All you can say is this time around, the players Arnie’s chosen … I think he trusts everyone.

Criticised by some Socceroos fans for his occasional struggles to be involved in general play at international level, Maclaren – a self-proclaimed “tap-in king” who scores freely at A-League level, but has only eight goals from 26 caps for Australia – said he felt the intricacies of his style and role were often misunderstood.

“The modern game is changing. I remember even seeing a stat – Erling Haaland touched the ball 13 times in a Premier League game, but he scored a hat trick. I’m no different, but he’s just a superstar,” he said.

“All the strikers bring different things. Jase can drop short, Dukey’s obviously got the height. We all bring a piece of the puzzle. I think my puzzle [piece] is that fox in the box that everyone knows me as.

“I think we all know I’m not the sexiest player with the ball at my feet, but I know that if there’s a chance that comes in the box, I’m as good as anyone.”