‘He might be world class again!’: Edouard Mendy’s ‘phenomenal’ save for Senegal against Qatar earns him rave reviews from fans on social media – as he redeems himself following his blunder against Holland

Edouard Mendy showed why he is regarded as one of the best goalkeepers in the world with a stunning save against Qatar and fans were quick to praise the Senegal goalkeeper on social media.

With his side 2-0 up, Mendy produced a stunning close range reflex stop to deny Ismael Mohamad.

The Qatar man met a cross from the left on the edge of the six-yard box and diverted it towards the bottom left.

Scroll down for video 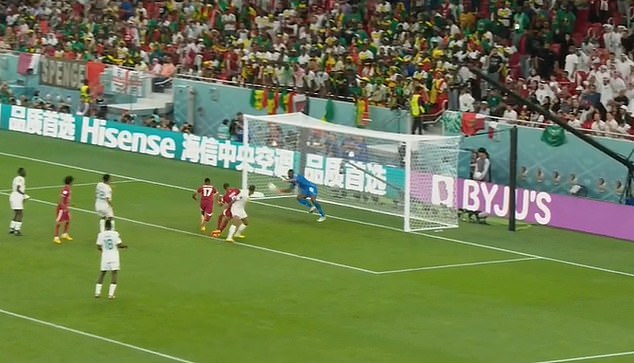 It seemed destined to be a goal but Mendy somehow managed to get down low and palm it wide.

‘Mendy with the save of his life,’ wrote one fan while another said it was ‘one of the best this tournament is going to see’.

Qatar did manage to pull one back but Senegal added a third to hand the hosts their second defeat in two games.