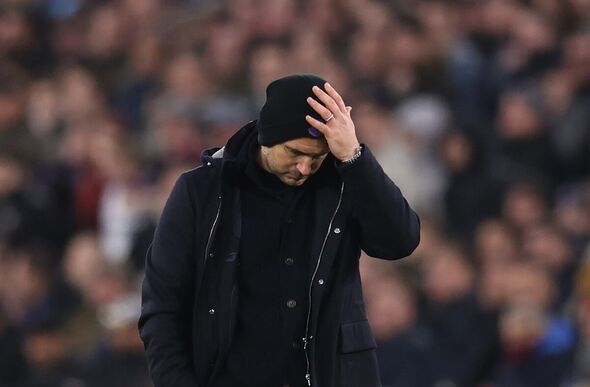 Everton have reportedly sacked Frank Lampard following the Toffees’ 2-0 dismal defeat to West Ham on Saturday. The loss left the Merseysiders languishing down in 19th place in the Premier League table amid a woeful run of form that has seen them go without a win in any competition since October.

And after coming under pressure for some weeks now Lampard has paid the price with his job, according to the Daily Mail, with owner Farhad Moshiri finally losing patience and wielding the axe on Monday.

Everton are two points off safety and are in real danger of being relegated from England’s top flight for the first time since 1951. And all the talk will now turn towards who they will turn to to try to get them out of danger.

The likes of Marcelo Bielsa and Sean Dyche are being linked with the role, and the club will no doubt be desperate to appoint a new boss as soon as possible.

Speaking following the loss at the London Stadium, Moshiri refused to give anything away regarding Lampard’s future, and also bizarrely suggested he was not responsible for making any decisions. He told Sky Sports when approached: “I can’t comment. It’s not my decision.”

Lampard insisted he would fight on, but now appears to have lost his battle to stay at Goodison Park. “Those things are not my choice, as such,” he said when asked about his future. “It’s my job to work and focus and keep my head down.

“I’ve got absolute confidence in how I want to coach. And if they are difficult conditions at the minute, for a lot of different reasons that I’m very aware of, then that’s it. I just have to do my job and it’s not for me to make too many diversions around it rather than talk about what I can affect and that’s the players, trying to get the right results.”

“I think a lot has been made out of that (the owners attending the game) the last week. I know there are issues around it, don’t get me wrong. I’m not trying to close my ears to anything.

“But for me as a coach, it’s never been significant. At Chelsea, the owner didn’t come to many of my games for 18 months. Pretty much zero I think. Maybe a friendly.

“It’s just about how you work, the actions you do, what you do every day, the support you feel, the communication, those sort of things.”