There were hugs, shouts and high-fives, Pablo Fornals was telling everyone that ‘West Ham are massive’ and even David Moyes couldn’t resist bopping along to Cotton Eye Joe.

But amid the dressing room celebrations to mark West Ham’s passage to a first European semi-final since 1976, it all got a little bit too much for the man who more than anyone embodies the club and what it stands for.

As he sat there in the full flush of victory, Mark Noble just burst into tears. It all just came pouring out, it all meant so much.

Then he composed himself and, wearing just a towel to protect his modesty, Noble grabbed a broom and swept the dressing room at Lyon’s Groupama Stadium clean. 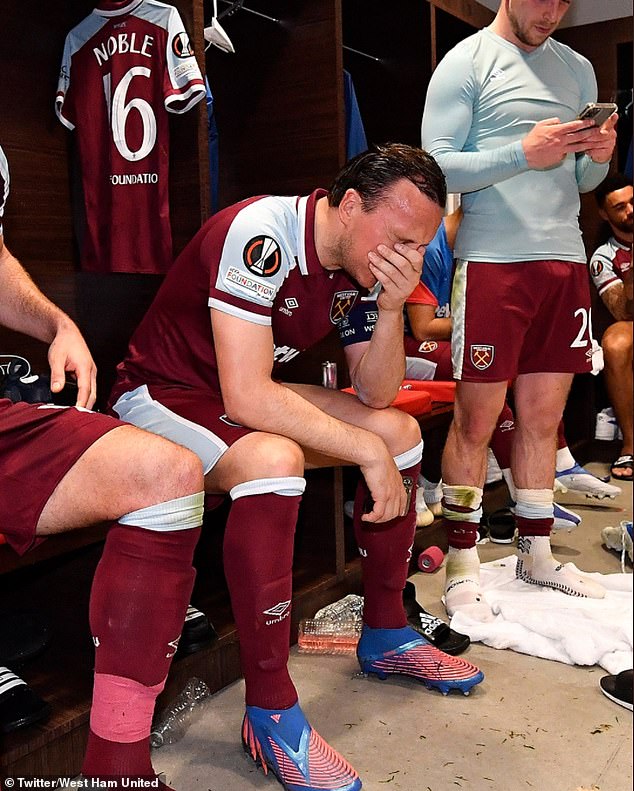 Mark Noble couldn’t hold back the tears after West Ham beat Lyon to reach the semi-finals of the UEFA Europa League, where Eintracht Frankfurt now await them 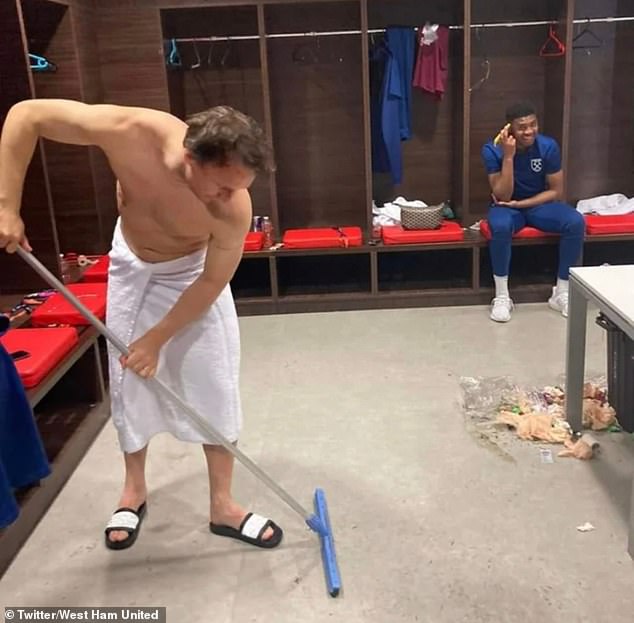 ‘The staff that you know better than anyone, like at West Ham, it’s the staff that have worked there for 30-40 years,’ Noble explained on Rio Ferdinand’s Vibe with Five show earlier this year. 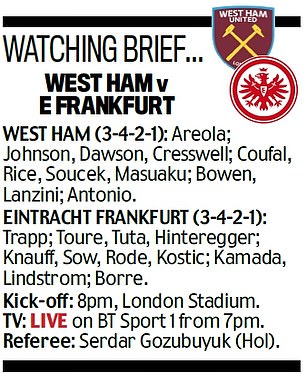 ‘They go in our dressing room after and all the milkshakes are tidied up, the bottles are cleared, the grass is all swept, everything’s gone… It’s spotless.

‘They go “cor, what a club West Ham is.” They lost the game in the last minute, heartbroken, but still had enough respect to sweep the changing room and leave it spotless.’

Such little details, such high standards, are important for ‘Mr West Ham’, the lad born in Canning Town who grew up a mile from Upton Park and lived his dream by playing almost 550 times for his beloved Hammers.

Football doesn’t often care much for fairytales but if 34-year-old Noble signs off his 18 years in the West Ham first team by lifting the Europa League in Sevilla next month it will fall into that category.

West Ham’s skipper is already assured of his place among West Ham’s greats – Moore, Brooking, Hurst, Bonds, Noble – regardless of whether they win the trophy. But what a send-off it would be. 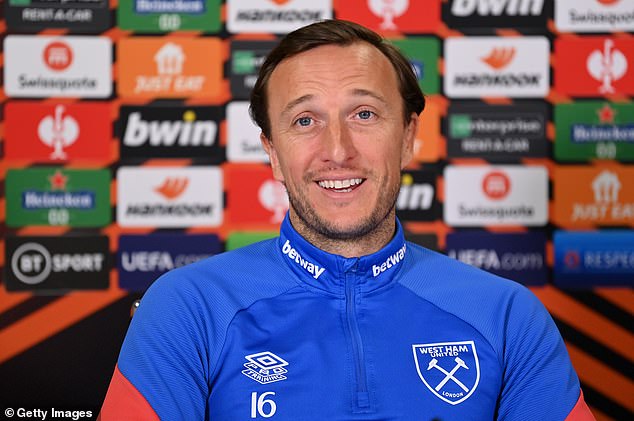 Noble, 34, announced last year this would be his last season as a West Ham player 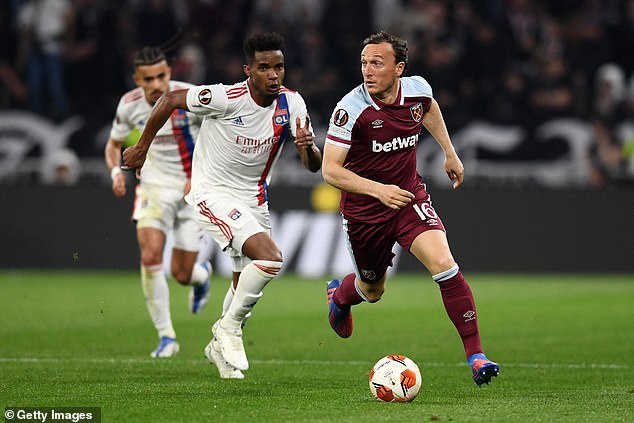 Noble is a lesser spotted phenomenon in the cosmopolitan Premier League – the local boy made good. While he doesn’t play as frequently in West Ham’s midfield as he once did – just 802 minutes this season – his influence is still felt. 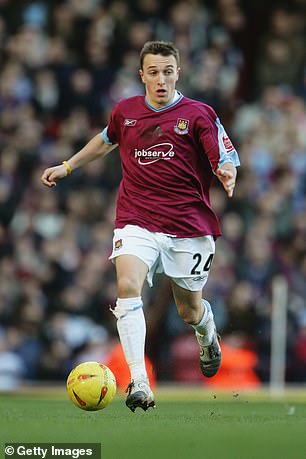 Growing up where he did, and with his dad Mark Snr a huge West Ham fan, perhaps he had little choice as to allegiance. As a schoolboy, he did train with Arsenal but it was always going to be the Claret and Blue.

Noble spent his youth crawling under the barriers to get into Upton Park and in his emotional farewell letter ahead of his final season, he wrote: ‘I am simply one of you, a fan who grew up just around the corner from Boleyn and used to stand on the forecourt asking for players’ shirts!’

When Noble made his first-team debut, three months after his 17th birthday in August 2004, he hadn’t yet passed his driving test and so simply jogged back home to Canning Town after the game.

It has not always been as good as it currently is for West Ham. They were playing in the Championship when Noble broke into the first-team and would suffer relegation again in 2011.

The club that gave us three of England’s heroes of ’66 proved not so big as to be immune from relegation. There was also a close shave in 2007, when they won seven of their last nine games to pull off a Great Escape

At times, there has been epic mismanagement behind the scenes and it took some time for the London Stadium to feel like a home after they departed Upton Park in 2016. 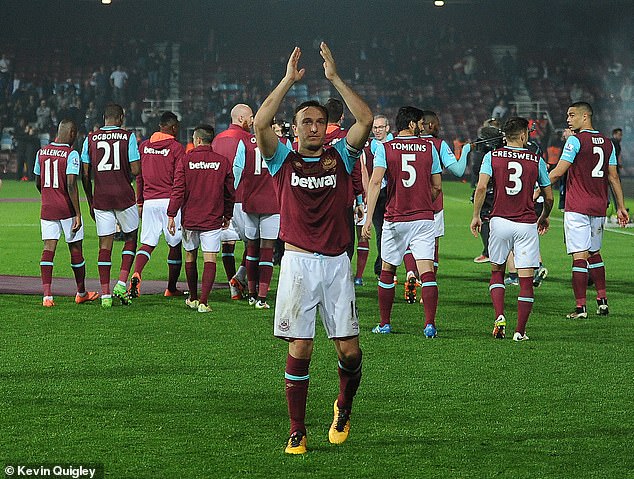 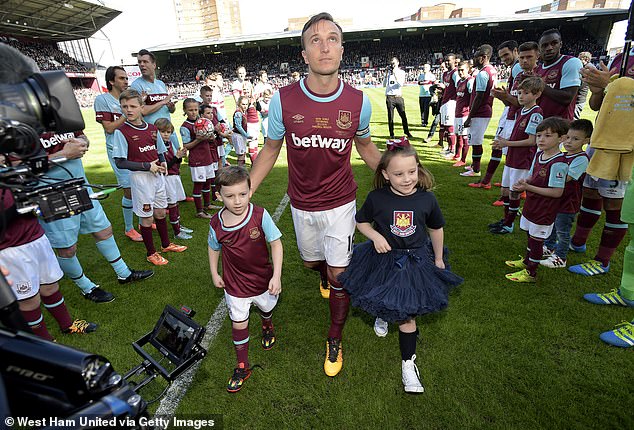 On their rare European forays, they suffered the embarrassment of being dumped out of the Europa League qualifying rounds by Romanian minnows Astra Giurgiu in consecutive seasons.

But Noble has stayed loyal, a reliable presence in their midfield – and gradually things have got better.

The last Upton Park season, when they finished seventh, was a positive one but Noble’s last one has been the best.

While the dream of a top four finish that looked possible at the turn of the year has faded amid an injury pile-up and a lack of January reinforcements, West Ham may yet make it into the Champions League by winning the Europa.

They’ve already seen off Sevilla and Lyon, but it would be remiss to think the hard work is done.

Their semi-final opponents Eintracht Frankfurt did overcome Barcelona in the last round after all, suggesting they are better than ninth in the Bundesliga suggests. 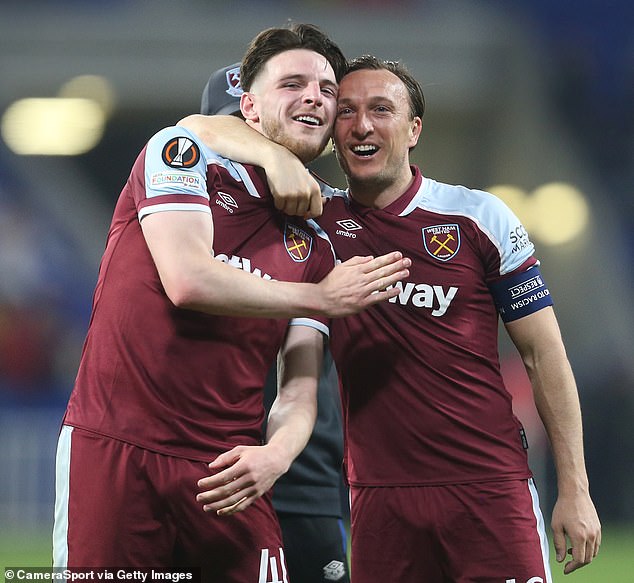 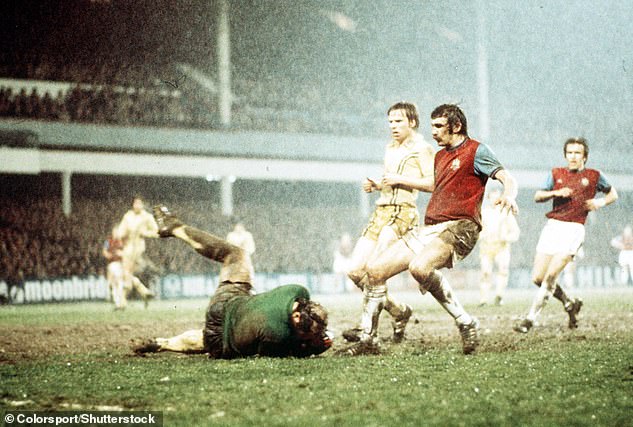 Back in 1976, West Ham overcame Eintracht Frankfurt in the semi-finals of the European Cup Winners’ Cup but lost in the final to Anderlecht 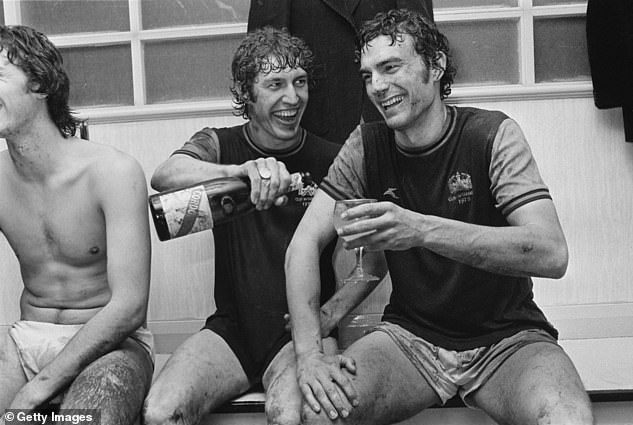 But having come so far, Moyes and his team will be going all-out to win the club’s first European trophy since 1965. That is with all due respect to the UEFA Intertoto Cup, won in 1999.

‘Did I imagine it? Yes. Did I think this would happen? Probably no,’ Noble said on the eve of Thursday’s first leg in London.

‘This season for me, after announcing that this would be my last, has been special. But it’s not over yet. We’ve got an incredible game here and probably a bigger game in a week’s time.

‘To be able to enjoy that with the West Ham fans, with the players and staff, is an incredible achievement. Do I think it’s possible to win? Yes.’

If they make it, Noble won’t need to do a John Terry from 2012 and dress up in full kit for the trophy lift. He’ll hope to be there in the team, or at least on the bench. 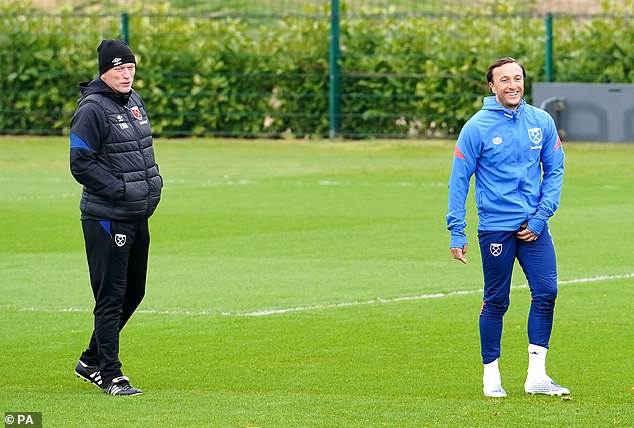 And he has already ruled out reneging on his retirement if they make the Champions League, joking he’ll happily sit in the stands at the London Stadium with the Europa League trophy next to him.

But his personal ties will continue. Noble will surely be offered a coaching role at the club next season and his son Lenny plays for the academy.

As a fan, it will also satisfy Noble that the baton has been passed on in the West Ham midfield with Declan Rice and Tomas Soucek enjoying excellent seasons.

Although the in-demand England international Rice may depart this summer, the £100million-plus West Ham will receive for him should build a new core.

Rice and Soucek are the reason Noble has been restricted to just nine starts of football this season but he isn’t likely to complain too much with the team winning.

Noble, the man who had a testimonial just before Upton Park closed six years ago, will get a fond send-off from the Hammers faithful when they host Manchester City on May 15.

But just imagine if everyone is then jetting off to sunny Seville a few days later. Now that would truly be a sensational way to sign off for ‘Mr West Ham United’.