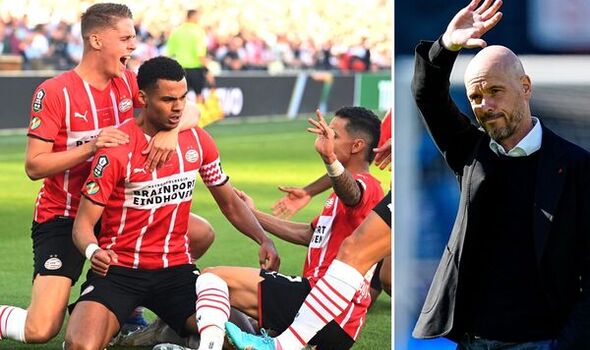 The stakes were always high for a team expected to win. Manchester United-bound Erik ten Hag has opted to remain tight-lipped on his future, despite the worst-kept secret in football. A verbal agreement over a three-year contract – with the option for an additional 12 months – is believed to be in place with Old Trafford chiefs but the uncertainty surrounding the Dutchman’s stay in Amsterdam is now threatening to spoil Ajax’s season.

Ten Hag was adamant that the domestic double was his only focus when addressing the Dutch media on Friday but it’s crystal clear the persistent questions regarding the United hot-seat have caused disruption behind the scenes or at least a distraction.

Ajax’s players are having to answer for their boss and the 2-1 KNVB Cup final defeat to their bitter rivals is now threatening to tarnish the legacy he leaves behind in Holland.

The Eredivisie leaders were in control before throwing the game away in a matter of second-half minutes as PSV seized the initiative to stun the hesitance of Ajax, who sorely missed their top goalscorer, Sebastian Haller, in attack.

He was a shock omission when the teams were announced one hour before kick-off, another high-profile call Ten Hag will now have to answer up to as inevitable scrutiny awaits.

Ten Hag’s side, who were the firm favourites heading into the crunch meeting at De Kuip, had to weather an early storm that was spearheaded by threatening PSV attacking duo Eran Zahavi and reported Arsenal target Cody Gakpo.

The Israeli goal machine had the ball in the net but the goal was later ruled out for offside to spare Ajax’s blushes and it proved to be a major wake-up call.

Ajax then started to grow into the game and show more belief in one another. Ryan Gravenberch, the club’s 19-year-old midfield sensation who has recently discussed personal terms with Bayern Munich, took the bull by horns to open the scoring.

Weaving inside and showing exceptional balance to keep his feet, the exciting teenager played a quick return pass with former Everton flop Davy Klaassen before curling home from 20 yards.

Shortly after, it was seemingly 2-0 when Noussair Mazraoui, who is also close to joining Bayern Munich (on a free transfer), motored forward before rifling home into the bottom right-hand corner.

PSV were let off the hook this time around though, with the goal ruled out for offside but after the interval, their moment would finally come…

It was Mexican Erick Gutierrez who timed his run to perfection and ghosted around the back to get on the end of a flick-on, following a set-piece.

Yet things would get even better for PSV when Gakpo fired them ahead just two minutes later as Ajax totally fell apart. The flying Dutchman cut inside before lashing the ball home from outside the area.

Ajax thought they’d levelled things up when Klaassen finished a slick team move but for the third time in the match, the goal was once again ruled out for offside. Dusan Tadic would then hit the post just moments later and you began to wonder whether this would be his side’s day.

If this was a glimpse of Ten Hag’s tactical blueprint at United, it’s clear the club will be making a number of signings to ensure he has the players to carry out the style of football he desires.

Poster boy Antony, already linked with a move to United with his current manager, was missing through injury and Ajax were really lacking quality in the wide areas despite their determination to create chances from the flanks.

Instead, it was the presence and quality of Gravenberch, Klaassen and Tadic that would hold the key to any result. United simply cannot rely on their current crop of midfielders to win them football matches.

The creative spark of Bruno Fernandes will be of immense use to Ten Hag, who clearly encourages his teams to play through the thirds with swagger and the Portuguese’s productivity and creativity will remain a huge asset moving forward.

Ajax also had plenty of noticeable quality at right-back in Mazraoui, who has been given a license to get forward and kickstart attacks.

You have to wonder whether Aaron Wan-Bissaka and Diogo Dalot are up to the task and both face a fight to win over whoever walks through the door this summer.

For a team considered to be champions-elect, Ajax cracked under pressure shortly after half-time when they conceded the two goals in two minutes, which came from individual errors.

Ten Hag will be looking to eradicate the sloppiness but he may have his work cut out in that department at United with Harry Maguire among those prone to a mishap, particularly when playing out from the back as the Dutchman encourages.

Ultimately, Ajax’s star man Haller was a gigantic miss in attack – a decision that clearly backfired as far as Ten Hag was concerned. They were lacking a goal threat throughout proceedings and only really looked like scoring when shooting from distance.

Now Ajax’s entire season is riding on the Eredivisie title and although they still boast a healthy four-point lead, cup glory may have given PSV the psychological edge in the final weeks of the campaign…