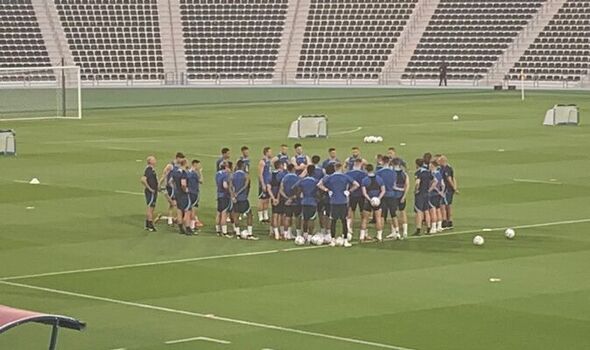 Gareth Southgate has received a welcome boost ahead of England’s World Cup opener against Iran after all 26 players participated in his side’s first training session in Qatar. The Three Lions touched down in the Middle East on Tuesday after meeting up at St George’s Park in Staffordshire on Monday as preparations for their Group B campaign now begin to intensify.

And there was positive news as England headed out onto the turf in Al-Wakra with every player deemed fit enough to be involved in the session.

Kyle Walker has been stepping up his recovery from groin surgery and he was able to train alongside the rest of his team-mates despite not featuring in the Premier League since the 6-3 thrashing of Manchester United in October.

James Maddison also raised alarm bells on Saturday when he hobbled off with a tight hamstring after scoring in Leicester’s 2-1 win at West Ham but he too, is believed to be okay in more upbeat news for Southgate and his coaching staff.

Assistant coach Steve Holland was on hand to address the players before they began their late afternoon training session in Qatar.

The England squad had also been participating in some yoga in the morning to loosen up their muscles and joints following the long flight from London.

Kalvin Phillips, who has only played 40 minutes of football since returning from a shoulder injury, was the first of England’s players out on the grass.

The Three Lions were forced to contend with temperatures of 33 degrees for the training session as some of them donned vests to acclimatise to their new surroundings.

Speaking last week during his press conference, Southgate explained his decision to include Walker in the squad over Reece James, who was also suffering from injury but was left behind much to his disappointment.

“Kyle’s a little bit different in that he’s not back in full training yet but he’s going to be available before the end of the group stage,” Southgate said.

“Of course we had to make a very difficult call with Reece [James] who we think is a fantastic player but he wasn’t going to be available, if everything went perfectly, until the latter stages of the tournament.

“There are too many unknowns for us on that road to recovery and also I don’t think we can take a player who is not available for the group stages as that would be deemed arrogant in some circles.

“But also, if everything went well and he was available and he was ready and we were picking him, then you’d be dropping him into a quarter-final after eight weeks out and that would be really demanding. Tough call. Kyle is a long way ahead of that and is progressing really well.”

England face USA in their second group match before facing Wales in an all-British showdown.

Captain Harry Kane is confident his country can lift the trophy, telling Sky Sports: “We have to believe we can win it.

“I look back at England 10, 15 years ago and it was almost [like] we were scared to say we wanted to win it. I think one of the big shifts that we’ve made over the last four or five years with Gareth is not being afraid to say that.”