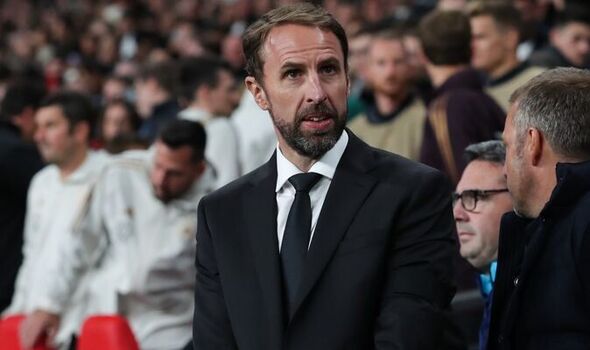 England manager Gareth Southgate faces the impossible task of naming his 26-man squad for the World Cup in Qatar next month. The former Middlesbrough boss has thrown caution to the wind in including 55 players in his provisional squad, though that won’t include several young talents.

Despite not lifting any silverware, England have had top talent rising through the ranks for years. Prospects such as Jude Bellingham, Phil Foden and Bukayo Saka are amongst the youngest Three Lions stars certainties to be named in this year’s squad.

England have a fresh wave of talent ready to be called into action and they could have a key role to play in the 2026 World Cup. Express Sport takes a look at nine stars who could progress into international heroes.

Wildcard shouts for Liverpool teenage talent Harvey Elliott have emerged lately, though whether he has gained the trust of Southgate yet remains to be seen. The 19-year-old has excelled for the England under-21’s and his versatility could prove a useful asset in years to come. If he isn’t at the upcoming World Cup, he will be at the next one.

Chelsea academy product Levi Colwill proved hot property over the summer, though Brighton managed to secure his signature on loan – acting as a sweetener in Marc Cucurella negotiations. The left-footed centre-back shone at Huddersfield Town last season and his breakthrough on the big stage feels imminent. Colwill has represented England at youth level and made his under-21 debut earlier this year and should have a big future ahead of him in the Premier League.

There were rogue shouts that Djed Spence could have a chance of making it into this World Cup’s squad, though his three minutes played this season makes that a near-impossible call for Southgate to make. The right-wing back impressed at Nottingham Forest last season and will be another contender for England’s right-back spot in the future, assuming Antonio Conte has given him a chance by then…

Many feel it is a toss-up between Chelsea star Conor Gallagher and Manchester City’s Kalvin Phillips for a place on the plane to Qatar. Assuming Southgate sides with the latter, Gallagher will feel that he won’t need to improve much more to be a 2026 squad member. With N’Golo Kante and Jorginho set to leave the Blues at the end of the season, as it stands, Gallagher could be a regular at Stamford Bridge by the time the Canada/Mexico/United States-hosted competition comes around.

Reports have emerged that Eberechi Eze is in Southgate’s 55-man squad, though the competition could arrive a year too soon for the Crystal Palace star. The versatile forward has been excellent for the Eagles so far this season and his creativity will make him a key player going forward – though Palace fans may feel it is unlikely that Eze is still with them by the time 2026 comes around if he continues his excellent progression.

An injury against Brighton in April has kept Southampton star Tino Livramento sidelined for most of this year, putting a pause on his exceptional progression. The former Chelsea prospect can play in either fullback role and his desire to be a presence in both halves will make him a serious talent going forward – and have the Blues licking their lips at their buyback clause. Assuming Livramento’s career is not significantly impacted by his long-term knee injury, he will be a shoo-in in the future.

Tottenham star Ryan Sessegnon will be hoping to have nailed down England’s left wing-back spot by 2026 given there is not significant competition for the spot coming through the ranks, besides the aforementioned Livramento. The former Fulham star thrives going forward and will be hoping that he can develop his defensive work further so that he is one of the first names on the team sheet in the future.

Winger Noni Madueke was linked with a return to the Premier League over the summer, with Leicester and Aston Villa interested, though opted to pen a new deal with PSV in hope of developing further in the Eredivisie. The 20-year-old has not featured so far this season but is expected to return later this week, just in time to take on Arsenal in the Europa League.

Madueke scored three and assisted three in 18 appearances last season, with his raw potential catching the eye. The teenager came through the ranks at Tottenham before joining PSV in 2018, and he will be hoping that he can make the north London outfit rue not being able to retain his services for many years to come.

Everton winger Anthony Gordon almost joined Chelsea this summer in a deal worth over £50million, and his value will soar further if he continues to develop and is able to earn himself an international cap. The 21-year-old has an abundance of pace and energy that will make him an exciting forward to watch in the future, especially if his end product continues to improve.

Marcus Rashford, Foden, Jadon Sancho, Jack Grealish, Saka and Raheem Sterling means that England have an abundance of wingers already, though Gordon’s confidence in his ability would indicate that he does not feel he is without a chance of international success in the future.