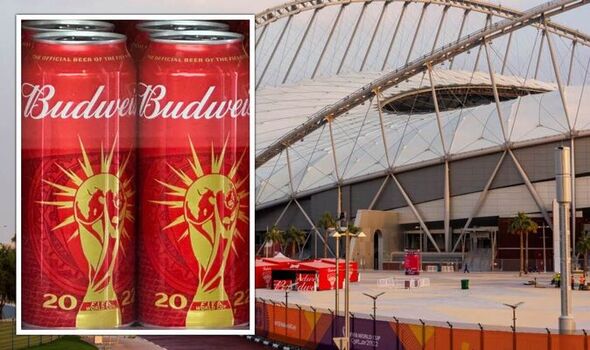 The move comes after pressure from host nation Qatar – but controversially corporate guests will still be allowed to drink at games. And last night supporters branded Fifa officials bungling killjoys for the U-turn just two days before the controversial tournament is due to kick-off.

The football governing body planned to allow official beer Budweiser to be sold outside all eight venues when games are being played in a relaxation of the Muslim state’s strict alcohol rules.

But on Friday, Fifa said the hundreds of thousands of supporters pouring into Qatar this weekend would have to go without a drink as they arrive to see their team.

Booze sales for the month-long football festival will be limited to the authorised fan zones as well as licensed restaurants and hotels.

The move was negotiated by Fifa president Gianni Infantino, Budweiser, and Qatar’s organising body, the Supreme Committee for Delivery and Legacy.

Qatar is mainly teetotal but its big ex-pat community is allowed to buy alcohol in licensed premises and non-Muslim locals drink at home with a permit.

The fan zones exemption will only allow sales between certain times, and a pint will cost £12 – with drinkers limited to four each to stop drunkenness.

And revellers arrested for being drunk face being taken to a special sobering-up zone.

Last night supporters blasted Fifa’s change of heart. Ashley Brown, spokesman for the Football Supporters’ Association said: “The real issue is the last minute U-turn which speaks to a wider problem – the total lack of communication from the organising committee.

“If they can change their minds on this at a moment’s notice, supporters will have concerns about whether they will fulfil promises relating to accommodation, transport or cultural issues.”

In Qatar, England fans looking forward to the Three Lions’ opening game against Iran on Monday, reacted with anger and astonishment at the booze ban.

Brian Davidson, the first supporter to drink an official World Cup beer at a fan zone yesterday, said: “I’m devastated. It doesn’t make sense. What’s wrong with having a beer at a match?

“Millions of people are coming from all over the world and they just want to watch football, enjoy the sun and knock back a few beers. I’ll just have to go to the fan zones or a hotel for a drink.”

And Mick Garner, 67, from Scunthorpe, who has watched every England match for nearly 50 years, said: “Some fans will be annoyed because part of the marketing was that beer was available at the stadiums.”

Ex-pat Ahmed Mohammed, 29, a teacher from Bedford with tickets for the Three Lions’ games against the USA and Wales, said the authorities do not have faith in fans to behave. “They have this impression that England fans are hooligans who can not be trusted with alcohol but the vast majority are very sensible,” he said.

But England goalkeeper Aaron Ramsdale vowed the ban would see the Three Lions play better to cheer up fans denied a beer.

“Hopefully with them not being able to drink, we can perform on the pitch to give them that excitement and buzz,” said the 24-year-old Arsenal stopper.

A Fifa spokesman said “a decision has been made to focus the sale of alcoholic beverages on the FIFA Fan Festival, other fan destinations and licensed venues”.

And last night a World Cup source added: ”A larger number of fans are attending from across the Middle East and South Asia, where alcohol doesn’t play such a large role in the culture.

“The thinking was that, for many fans, the presence of alcohol would not create an enjoyable experience.”

But brewing giant Budweiser, one of the main sponsors of the World Cup who had been set to sell beer at the grounds, tweeted: “Well this is awkward.”