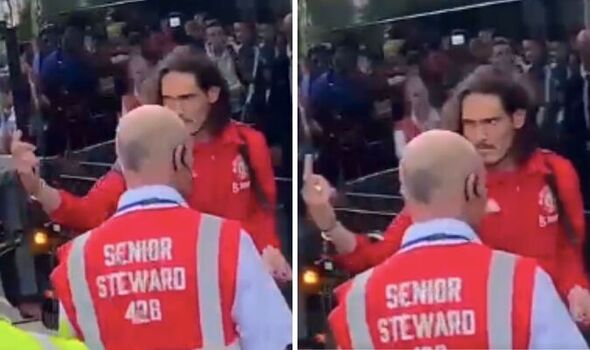 Edinson Cavani’s two-year Manchester United stint has ended on a sour note after he showed a fan his middle finger following the 1-0 defeat at Crystal Palace. The Uruguayan international is set to depart Old Trafford this summer upon the expiry of his contract following an injury-ravaged campaign.

Yet despite his frustrating fitness record, Cavani will still be held in high esteem by supporters for his relentless work-rate while on the field.

He was excellent in the second half of last season under Ole Gunnar Solskjaer, who eventually convinced him to sign a one-year contract extension.

But things haven’t worked out this term for both the striker and his club, as he prepares to wave goodbye in the coming weeks.

Footage has now emerged online of Cavani giving a supporter a middle finger as he made his way onto the team bus outside Selhurst Park.

El Matador did not look in the best of moods for obvious reasons and was taking no prisoners as supporters shouted over to him.

It appears something triggered the veteran, who later walked away from the scene and onto the coach.

Wilfried Zaha’s goal proved the difference between the two sides as United’s miserable season ended with a whimper.

Cavani started in attack in place of the injured Cristiano Ronaldo, who finishes the campaign with 18 Premier League goals.

Speaking ahead of the game, interim boss Ralf Rangnick confirmed the match would be the final chapter of Cavani’s United career.

“It would be good to finish this season with a good game, three points, and I’m pretty sure the team sees it the same way,” Rangnick told MUTV.

“Out of our starting XI, there will be 10, apart from Edi Cavani, who will still be playing for this club next season.

“I presume they’d much rather play in the Europa League than the Conference League.”

Cavani made 59 appearances in United red, scoring 19 goals for the Red Devils.

He is now hoping to remain in Europe as his reps continue discussions with other clubs over his future.

Boca Juniors have been keen to bring Cavani back to South America, while he was also an option for Barcelona in January before they signed Pierre-Emerick Aubameyang on a free transfer.

Erik ten Hag was in the stands at Selhurst Park to watch his new side in action on another miserable afternoon under Rangnick.